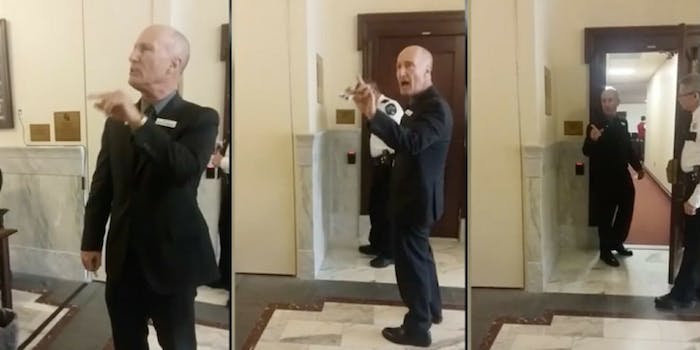 The students were there to discuss sex ed and birth control, not abortion.

An Idaho senator canceled a meeting with college students over birth control legislation and threatened them with arrest, which has resulted in an ethics complaint from another senator.

According to video obtained by the Idaho Statesman, Sen. Dan Foreman (R-Moscow) shouted at University of Idaho students on Monday for wanting to meet with him, then threatened to call authorities on the group should they visit his office again.

The students had traveled nearly 300 miles from Moscow, Idaho, to participate in a Boise lobbying event, and had scheduled several meetings with Idaho lawmakers, including Foreman. After Foreman canceled last minute and the students left him a note with condoms in his office, the students ran into Foreman in a hall later that day.

“Abortion is murder. I stand against it,” Foreman said during the encounter, which students recorded and posted online. “I am a Roman Catholic. I am a conservative Republican. I think what you guys do stinks…The next time you walk in my office, you’re going to be dealing with ISP.”

However, according to Paul Dillon, public affairs director for Planned Parenthood of Greater Washington and North Idaho, the students weren’t meeting with lawmakers to discuss abortion. They were there to encourage them to vote for a bill that would allow a 12-month supply of birth control to be issued at one time, and for better sex education on college campuses.

Later Monday, a Twitter account believed to belong to Foreman addressed the incident in arguing with one of the students who attended the lobbying event. One tweet stated that his priority is “saving the lives of my constituents,” and that students should discuss “killing babies” with a Democratic lawmaker, Sen. Maryanne Jordan from Boise.

The Twitter account was later taken down, then reactivated to state that it wasn’t run by Foreman and was a “parody” account, before it went offline again. Jordan told the publication she’s filing an ethics complaint against Foreman to Senate President Pro Tem Brent Hill.

“It’s one thing to disagree with policy, it’s another thing to position something like that against another lawmaker,” Jordan said. “This type of behavior is beneath the Idaho Senate.”

According to the Associated Press, Forman, who’s in his first term, had previously been caught lashing out at someone on camera at the Moscow county fair in September, telling an unidentified person to, “go straight to hell, you son of a bitch.” His anti-abortion proposals have included charging people who undergo abortions and the doctors who perform them with first-degree murder. He’s also faced criticism for calling global warming “nonsense” used by left-wing fanatics to raise taxes in an email to a constituent.