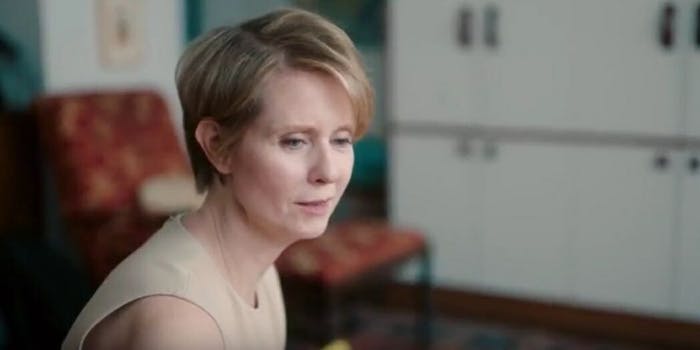 She wants New York to be a progressive leader.

Cynthia Nixon wants to legalize weed in New York, and the actress running for governor is apparently making that one of the most pressing issues of her campaign.

Already running to the left of current New York Gov. Andrew Cuomo, Nixon said at a rally on Saturday that she wanted to make sure neighborhoods of color would get some of the first dibs at landing licenses to sell marijuana.

In fact, she told the newspaper that what she sees as a racial justice issue should be the top priority for the state.

“It’s really important for New York to be a progressive leader again,” she said.

Nixon announced her candidacy in March, and though she’s well behind in the polls—the New York Times reported last week that Cuomo had a 22-point lead on her—she seems to be making inroads with younger voters and she seems to be slowly closing the distance on the two-term incumbent.

For Ms. Nixon, the survey showed that she has already gained traction among the Democratic base: She leads Mr. Cuomo 49 percent to 31 percent among Democrats who self-identified as “very liberal.” Her challenge: Only one in four Democrats identified themselves as “very liberal” in the poll, versus half who called themselves moderate or conservative.

The poll comes after a frenetic first five weeks of campaigning, as Ms. Nixon has attacked the governor in sharp and personal terms while rolling out some flashy progressive policy proposals.

Perhaps as a result of Nixon’s impact, Cuomo has begun leaning more toward the left during his campaign. Last month, Cuomo began speaking out in favor of possibly legalizing marijuana as well.