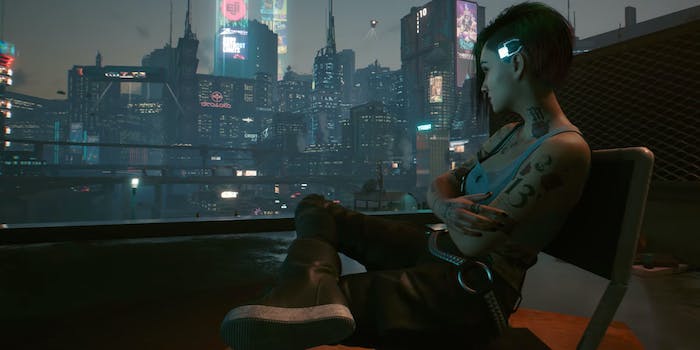 Ahead of the long-awaited release of Cyberpunk 2077, a CD Projekt Red release, reporter Liana Ruppert of Game Informer warned of epileptic triggers in the game. Ruppert says her article was met with backlash and gamer trolls who intentionally sent her seizure-inducing flash videos.

Cyberpunk 2077 will become available to consumers on Dec. 10, ending eight years of anticipation. Game journalists have been teasing the florescent, nihilistic title for years, writing about everything from the process of development to controversy surrounding the release.

But until recently, one issue went largely unaddressed. Video games often employ flashing lights, brilliant colors, and sudden, startling, changes in the camera in communicate shifts in the story.

Published on Monday, Ruppert’s article examines the potential seizure triggers in Cyberpunk 2077 and provides a guide to allow gamers prone to seizures to enjoy the game with less risk.

General triggers are littered throughout the game, according to Ruppert. “Red glitching animations” are common, according to her article, but can be largely negated by use of blue light glasses, turning down the brightness on the screen, or adjusting colorblind modes. More than 1.2% of the U.S. population suffers from active epilepsy, according to 2015 data from the Centers for Disease Control and Protection. A number of other Americans suffer from seizures from a variety of sources, including prior illnesses and head trauma.

One pressing trigger caught Ruppert’s attention after it caused her to suffer a grand mal seizure. A feature in the game called “braindance” allows players to interface with memories, but requires an in-game headset that is, as Rupert put it, a “trigger on many levels.”

The headset features “a rapid onslaught of white and red blinking LEDs, much like the actual device neurologists use in real life to trigger a seizure when they need to trigger one for diagnosis purposes,” Ruppert writes. “This is a pattern of lights designed to trigger an epileptic episode and it very much did that in my own personal playthrough.”

The response to Ruppert’s article veered from gratitude to vicious trolling. Ruppert said on Tuesday she began receiving videos “disguised as support” that turned out to be “deliberate flashing to induce photosensitive triggers.” She warned other Twitter users with epilepsy who shared her article and receive video messages not to press play.

The purposefully dangerous reaction Ruppert received in response to her article is also leeching attention from her initial intent. If the conversation shifts to discuss online trolling, no one is talking about the potential triggers littered throughout Cyberpunk 2077. “Please keep the focus where it belongs: on accessibility,” Ruppert tweeted.

In the wake of Ruppert’s article, there are a few things that can be done to potentially help gamers sensitive to seizures. Her article provides a guide of sorts warning gamers about the more dangerous moments in the game. It could also prompt CD Projekt Red to create a workaround, allowing gamers to turn some of these flashing sequences off at the onset of gameplay.

On Tuesday, a statement on the official Twitter account for Cyberpunk 2077 pointed to a seizure warning in the game’s user agreement and said it will add another warning to the game. The statement also said the development team is looking into “a more permanent solution.”

The Daily Dot reached out to Ruppert.