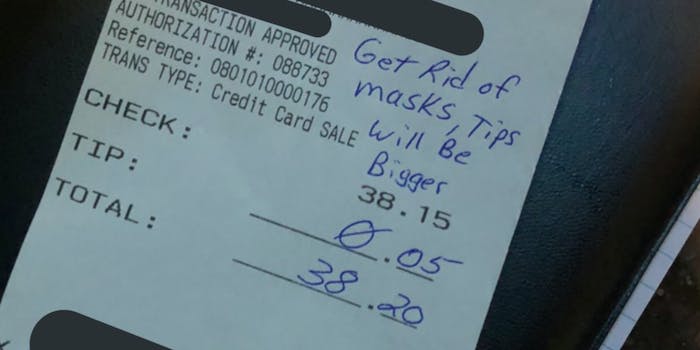 ‘Get rid of masks, tips will be bigger.’

A restaurant diner’s receipt went viral after he left a lousy tip and blamed the server for the city’s face mask mandate.

A receipt from Big Red East, a restaurant and sports bar located in Lincoln, Nebraska, was first posted to Facebook by Ali Siverhus, the server. In addition to only tipping five cents, the patron penned a note on the receipt, blaming the Siverhus for Lincoln’s city-wide mask mandate. “Get rid of masks, tips will be bigger,” he wrote on Aug. 1.

In her Facebook post, Siverhus explained the customer was seemingly upset she was wearing a face mask because “customers are not even required to wear masks at their table.”

“Just wrong on so many levels. First and foremost, the masks are a city mandate and there is nothing I or management can do about it. How is me wearing a mask affecting this man?” she questioned.

The customer also likely had to wear a mask to enter the restaurant. The tip was less than 2%, as the bill was $38.15.

Siverhus went on to say that she was “very nice” to the customer and his young son and brought their food and drinks out on time. “When I asked them how everything was tasting he said it was good and had no complaints,” she wrote.

She then addressed the customer directly.

“I hope your son didn’t see you do this and doesn’t turn into the piece of shit you are,” she continued. “I hope you never come back and if you do none of the servers will want to serve you or waste their time giving you anything beyond adequate service.”

The man who claims he left the tip, Rex Shroeder, contacted a local news outlet that reported the story, 10/11, to allege he also left $10 in cash. He told 10/11 he wanted the low tip and receipt to be a “dig at the establishment,” not Siverhus.

Servers have to rely on tips to earn a living wage, and the restaurant industry has been especially hard-hit during the coronavirus pandemic. According to Market Place, One Fair Wage, a nonprofit that advocates for restaurant workers, estimates that tips are down between 75% and 90% due to the pandemic.