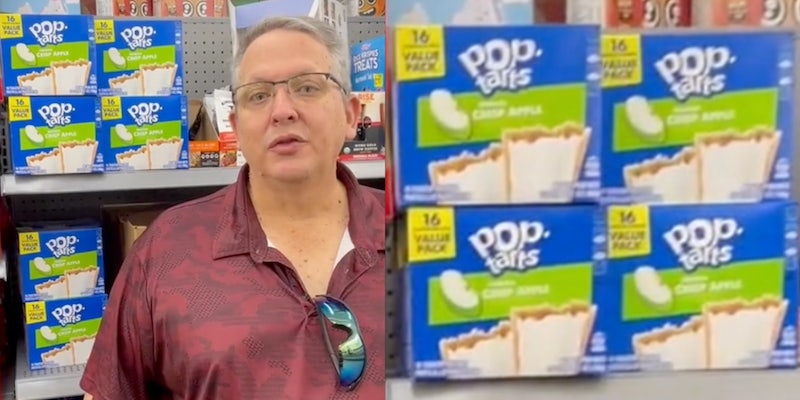 ‘The prophecy has been fulfilled’: TikToker who predicted that Crisp Apple Pop Tarts would fail has the last laugh at Walmart clearance section

'As predicted, the Crisp Apple did not do very well.'

A TikTok couple went viral after they predicted how well the Crisp Apple Pop Tart flavor would do in stores.

The couple, who posts on their joint account @kimandthepapertiger, typically do food reviews and product taste tests.

In an earlier video video, the Tiktok duo sampled the Crisp Apple Pop Tarts. Needless to say, they didn’t seem to like the taste of it. The man describes the taste as “a little more apple flavor than the apple fritter,” referring to the Apple Fritter Pop Tarts. He also added that it was “better hot than cold.”

Though, they both agreed that they were not fans of the flavor.

“Green apple Jolly Ranchers,” the woman adds, noting that the Pop Tart has a similar flavor.

In a follow-up video that went viral, the man stands in front of the clearance section at Walmart. Several of boxes of Crisp Apple Pop Tarts are stacked on the shelf.

“As predicted, the Crisp Apple did not do very well,” he says. “Has been moved to the clearance aisle.”

The video has been viewed over 649,000 times as of Monday. Many people in the comments agreed, often jokingly, that they, too, believed the Crisp Apple Pop Tart would wind up in the clearance section.

“I told them! I said “the crisp apple WILL NOT do well!! It’s gonna go straight to the clearance aisle!” But NOOOOOO they wouldn’t listen,” one user wrote.

“Yup just as we predicted. Saw it coming,” a second said.

“The prophecy had been fulfilled,” a third commented.

Other users didn’t understand why this flavor didn’t do well, claiming it does taste good.

“Crisp apple is my favorite flavor,” one person stated.

“But it sounds so good,” a second wrote.

Others argued that the flavor could have done well if it were renamed “Apple Crisp” and given a less sour apple taste.

Pop Tarts launched Dutch Apple as one of its initial frosted flavors, though it was later discontinued. In 2018, the flavor made a comeback as Crisp Apple, but according to @kimandthepapertiger, it’s not doing too well.

The Daily Dot reached out to @kimandthepapertiger via TikTok comment.