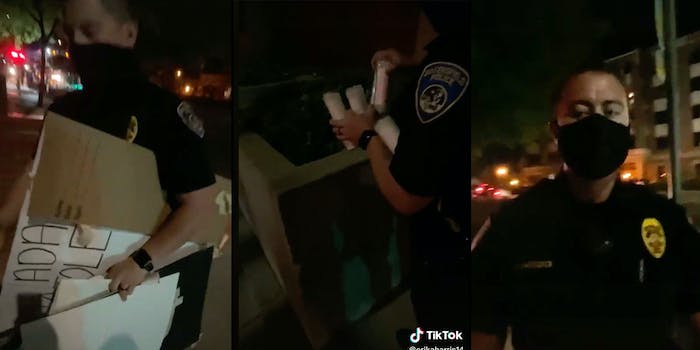 The recent police shooting deaths of Adam Toledo in Chicago and Daunte Wright in a Minneapolis suburb have led people across the nation to express grief and outrage. Video from a TikToker in Bakersfield, California shows a makeshift memorial created for the two slain youths—and a police officer destroying the memorial despite onlookers expressing their concern.

The video, uploaded to TikTok on Sunday by user @erikaharris14, appears to be chronicling activity from Saturday’s protests against the killings. Local activist group 661 Voices Heard, for which Harris is an organizer, planned a march to the Bakersfield Police Department, KGET-TV reports. Harris points to an Instagram for 661 Voices Heard in her TikTok bio, though it appears not to be operational.

The video was also boosted after being posted on the r/PublicFreakout subreddit with the headline, “Police are going around and destroying memorials for Adam Toledo and Daunte Wright.”

It starts with a person (presumably Harris) walking up and filming a police officer who is dismantling a sidewalk memorial including candles and handwritten signs for Toledo, 13, and Wright, 20, both killed by police in cases receiving nationwide attention.

She asks the cop repeatedly, “Why are you taking this one down?” as he’s beginning to dismantle the memorial. After he briefly engages her (his speech is unclear in the video), she says, “Hey, you could have some more respect.”

The officer indicates that she can pick it up if she wants, but he then takes the signs to his police car parked nearby. Harris follows him, saying, “It’s on the sidewalk. She then asks, “What’s your badge number?” and, “Can I have the signs at least?”

Harris then escalates, saying, “Why not? Because you’re an asshole, that’s why.”

The video then cuts back to the memorial, with the same woman asking why the memorial needs to be taken off the sidewalk. The officer just stands there, but then she gets a close-up of the name on his uniform and asks for his badge number, which he gives.

The video concludes with additional people coming up to the memorial to ask what happened.

According to a Bakersfield Now report on Saturday’s events, “The Bakersfield Police Department says a few public areas in the downtown area were vandalized during yesterday’s Daunte Wright protests.”

The story further notes that “a small group of people vandalized public areas near the police department, including offensive phrases written with chalk and permanent markers, according to the BPD.”

BPD reportedly asked protesters to remove a memorial for Wright that was placed on the sidewalk in front of the department headquarters. BPD claims the memorial was “left behind,” and they “cleaned the memorial up in an effort to maintain a safe and professional image for those who seek police services, according to the BPD.”

A police department spokesperson also told TMZ that the officer removed the memorial because it presented a fire hazard: “This would not be the first time a vigil went up in flames so things have to be removed to avoid a fire.”