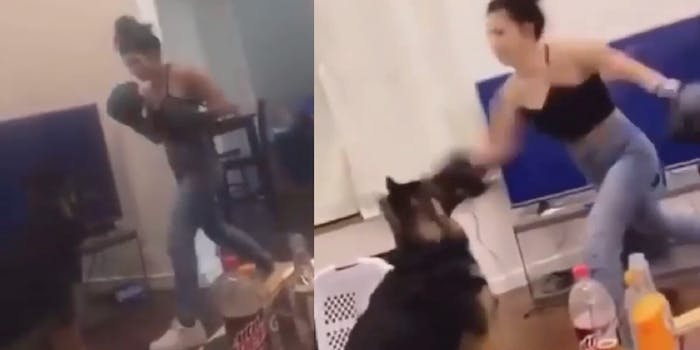 The Idaho Humane Society is investigating after a video showing a woman punching her dog went viral on social media, according to KTVB7.

The Animal Hope & Wellness Foundation shared the video to Facebook on Monday and identified the woman in it as London Miner.

In the video, Miner is seen wearing boxing gloves, punching her dog from alternating sides 10 times. The dog attempts to jump up at her in between punches.

A man, presumably the one filming, is heard laughing throughout the video.

“I hit him so hard; I felt that too,” the woman says at the camera after her last punch.

The video has since been viewed almost 400,000 times, with thousands of comments calling for the dog to be rescued.

Following the video being posted to social media, “an overwhelming number” of phone calls and reports were made to the Idaho Humane Society, its Animal Care and Control said, per KTVB7.

According to the society, the investigation is “pending review at the local prosecutor’s office for a charging decision.”