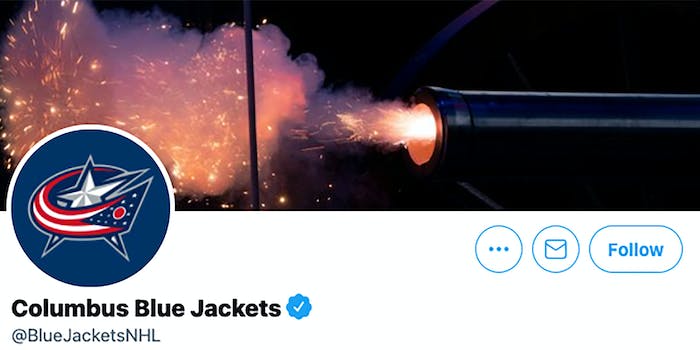 'Please shut up at this time.'

The sports world was rocked on Monday with news that 24-year-old Columbus Blue Jackets goalkeeper Matiss Kivlenieks died in a Fourth of July accident.

An initial report Monday morning said he died falling and hitting his head on concrete at a Fourth of July party in Novi, Michigan, while trying to get clear of a malfunctioning firework. The medical examiner’s report concluded the Latvian hockey player died of chest trauma due to a fireworks mortar blast.

But even as the team’s social media account began posting content memorializing the player, it kept its cover photo—a sparking cannon—up for several hours after the report circulated, drawing umbrage from at least one observer on Twitter.

“This is the current @BlueJacketsNHL Twitter page cover pic,” wrote Laura Moon, adding a facepalm emoji and noting, “No joke.”

The cannon is a long-standing tradition at Columbus’ home venue, Nationwide Arena; here, it is scaring a visiting announcer on a Vine shared via Twitter in 2016.

“They fire off cannons after the team scores so please shut up at this time,” bellowed the @B1G10Hockey account.

The @RowdyNoMore account added, “Yeah, it’s a cannon. The fire it every time they score, for 21 years.”

“HINT: It’s not a picture of fireworks,” the account pointed out.

The official account was working to make the #SticksOutForKivi hashtag happen, which mourning fans are using to show hockey sticks on their front porches to acknowledge the player’s passing.

Just after 4:30pm, the CBJ social media team changed the cover photo to a shot of a game at Nationwide Arena from deep in the crowd.

The news didn’t just inspire people to police the team’s social media account, though. The Associated Press’ tweet on the tragedy led one user to write, “May this be another motivation to make private fireworks illegal, so that only professionals engage in these displays.”

The Daily Dot has reached out to the Blue Jackets’ social media team for comment.