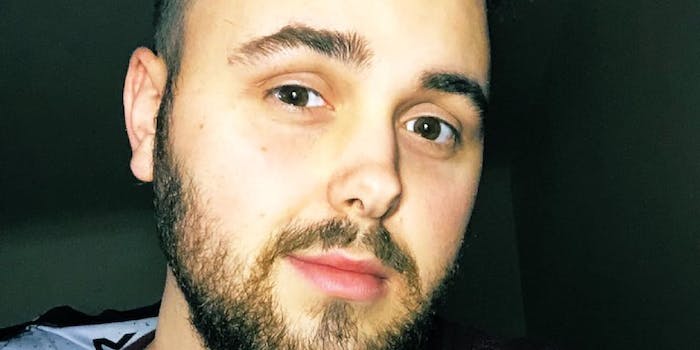 Halo pro faked his suicide—and gamers are in shock

The EasternMediaGG player, who is based in Canton, Ohio, posted a lengthy message to Twitter early Tuesday, concerning his fans. Then, his social media accounts went completely dark.

Frightened fans flooded to his page, posting words of encouragement and offering their help. A few hours later, a supposed update informed fans that Ozarts had attempted suicide and was in surgery. Hours later the truth began to emerge—Ozarts had fabricated the entire incident.

According to an update from the owner and CEO of Ozarts’ organization, EasternMedia, he is getting the help he needs.

In his TwitLonger message, Ozarts admitted his struggle with “very intense anxiety and depression issues.” He wrote about losing his job and struggling to find pleasure in competitive esports. He discussed previous suicide attempts and promised that he was seeking help. Near the end of the disjointed post, he announced his intent to retire from esports altogether. “I’m sorry but my passion is gone,” he said. He expressed remorse for anyone who felt let down by his decision and asked for forgiveness. The entire message was concerning, but it was the last line that really threw fans into a panic.

“Goodbye friends,” Ozarts wrote. “This will be my final message on this earth.”

After posting the tweet with only “I’m sorry,” in way of a caption, Ozarts disappeared from social media. Concerned fans flooded his comment section with words of encouragement and offers of assistance, but heard nothing back. A few hours later, another Twitter account—supposedly belonging to Ozarts’ cousin—posted an update.

“I’m struggling to tweet this but you all deserve to know,” the tweet reads. “And I honestly don’t care I’m his family.. Chris shot himself tonight and he is in surgery. Please.. please don’t go Chris. Fight @OzartsHM.”

That account has since been deleted, but the message sparked immediate concern from the community. The CEO of EasternMedia, Steven Zimmer, even set up a GoFundMe to help pay for Ozarts’ medical bills or—in the worst case—his funeral expenses. That is when things started to unravel.

Another account with the same profile picture as Ozarts’ alleged cousin began tweeting. “I don’t know who is running this account,” the new account, belonging to Sam Miller, tweeted. “But that is MY photo as the profile pic, so please change it. And Chris is also my cousin so remove my pic from your profile.”

I don’t know who is running this account. But that is MY photo as the profile pic, so please change it. And Chris is also my cousin so remove my pic from your profile.

A few messages later, he began to clarify things. “Idek what’s going on. I AM his cousin, and I just learned about all of this 20 minutes ago, and whoever is running the Hoover jmac account is not me,” he wrote. “Chris is 110% fine, my cousin FaceTimed him. Don’t believe this stuff on twitter.”

Yeah, yeah dude we get that.

What I am saying is your cousin used his Alt account to use your picture and name to swindle an entire community.

Like for thousands of dollars. He faked a suicide to get attention. That shit is illegal I think.

People started to question whether Ozarts had made the fake account himself. Many fans felt swindled, as they had already donated money to Ozarts’ GoFundMe. Tensions rose, and Zimmer took to his own Twitter and attempted to clarify the situation. He noted, in a video, that Ozarts was completely fine. He informed fans that the GoFundMe was in the process of being deactivated and refunding donations.

I need EVERYONE to watch this right now. pic.twitter.com/D3MIfPxD6T

In an attempt to make the entire process as transparent as possible, Zimmer posted consistent updates to his Twitter page. He noted that they were trying to track down the HooverJmac account holder, which belonged to someone in Ozarts’ area.

Finally, on Tuesday night, Zimmer posted a video explaining what had transpired. “I want to confirm with you guys, all these events were indeed orchestrated by Ozarts. Christopher. He made the account, he created the incidents. This is not a witch hunt, please don’t go after him,” he said. “Chris needs help. He needs a lot of help… He feels the need to create this extra attention for himself and it just went way overboard.”

Last tweet of the night. I’m fucking done with this… pic.twitter.com/6IeDXRKcF1

Not long after, the official EasternMedia account retweeted Zimmers’s video with a statement. “We want to confirm the events from this morning were in fact orchestrated,” the statement begins. “Christoper will be seeking professional help and staying in contact with us throughout the process.” It clarified that any donated money would be returned as soon as matters were concluded with GoFundMe.

On Wednesday afternoon, a statement from EasternMedia was released. The letter began by thanking the entire community for coming together and apologized to anyone negatively affected by the incident. “Do not hesitate to reach out if you need or want assistance to deal with any trauma surfacing from yesterday’s events,” the letter reads. “The safety and well-being of this community is our top priority, as well as contributing to the overall well-being of everyone inside the gaming and esports sphere. We want you all to know we are taking this extremely seriously.” The letter concluded with an announcement that EasternMedia would be holding a press conference on Saturday night.

Please read: Thank you everyone. An open letter regarding what has transpired.

Ozarts has not spoken publicly on the incident. Since his message on Tuesday morning, his social media accounts have remained dark.