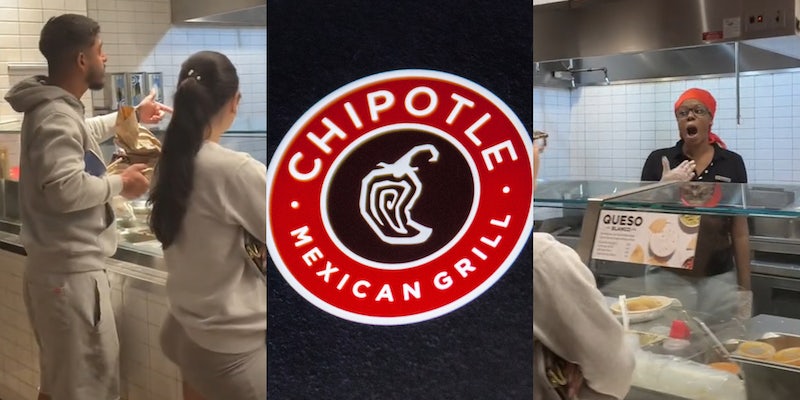 'Never argue with someone making your food!'

While there are many fast food and fast casual dining chains that are increasing their prices due to supply chain issues and inflation, there are some brands that seem to come under a lot more scrutiny than others online, like Chipotle. TikToker Robert Buckmon went viral for his rant on being charged about $25 for a steak burrito bowl, and others have argued that workers skimp on mobile orders.

Another criticism of Chipotle’s mobile ordering is that workers prioritize in-person orders over online or mobile orders. In a video that recently went viral on TikTok, with over 97,000 views, a customer confronts a worker for allegedly doing just that.

In the clip, a woman is speaking with a Chipotle employee when a male customer, who appears to be agitated, interjects to inquire about his order.

The Chipotle employee responds, “That’s not my fault.”

The tone of their conversation escalates, and they begin speaking loudly to each other. The male customer, who seems to be a mobile order customer, continues to mention how long ago he put his order in as the employee asks him to “be respectful.” Other Chipotle employees attempt to deescalate the situation.

“Asia go to the back,” a Chipotle employee says as they approach the counter. The worker responds by saying that she isn’t going to make the customer’s order for him.

TikToker Ronit (@ronitmcauley) captioned her video: “Went to chipotle after waiting for over 15 min IN STORE for my mobile order to be STARTED this happened @Chipotle this you?”

Ronit responded to a user who questioned Ronit’s use of the word “they” in a follow-up. She says, “OK, let’s get something clear about my last video. When I say ‘they,’ I’m referring to the employees at this particular Chipotle. This has nothing to do with race, gender, what’s on her head. I don’t care about the AirPod in her ear; I don’t care about any of that. Her behavior was unacceptable. She started off rude, to me, to other customers. This particular video was taken halfway through an incident where had started being rude to to the girl, and I guess the boyfriend then stepped in.”

Ronit claimed the worker was “rude” to her “for asking if I could have a time frame on” when her order was going to be ready.

“I had already waited and asked how much longer since the time frame had given me when I originally got there had elapsed. Everyone’s doing too much in this comments section, race has nothing to do with it, they doesn’t refer to any ‘people,'” Ronit says.

“Once went to chipotle. a CROWD of mobile orders waiting. ppl just walking in were served first for over 45 mins. never gone back,” one said.

“Online orders suck when u have to wait on people in line first gets frustrating if u don’t have enough people working,” another wrote.

Another claimed they stopped frequenting Chipotle after waiting nearly one hour for a mobile order. “Chipotle is too expensive and too much of a hassle now,” they said.

Some warned against confronting workers over wait times, however. “Never argue with someone making your food!” one pleaded.

Chipotle workers also chimed in to aim to explain why they prioritize in-person orders.

“I work at chipotle and line orders come first because they’re right in front of us! and we usually are flooded in online orders,” one said.

“Because customers who come in have priority for them. We have 3 people on shift at my job when online start coming in we will have only one person on,” another wrote.

Chipotle is reportedly working to fix one issue regarding its mobile ordering. Chipotle, according to Food & Wine, recently put an end to customers attempting the viral $3 burrito hack via its mobile ordering system. The hack requires that customers place a taco order utilizing a very specific method, resulting in a bunch of sides placed in disposable plastic containers, which purportedly became such a headache for employees to fulfill. Chipotle is now preventing customers from attempting the hack online.

“Guests are currently unable to order a single taco from our online ordering systems,” Laurie Schalow, Chipotle’s chief corporate affairs officer, told Food & Wine. “While we have long embraced customizations and even released our own hack menu, the current social media trend is resulting in a poor experience for our food, our employees and our customers waiting for orders.”

The Daily Dot reached out to Ronit via TikTok comment and Chipotle via email.