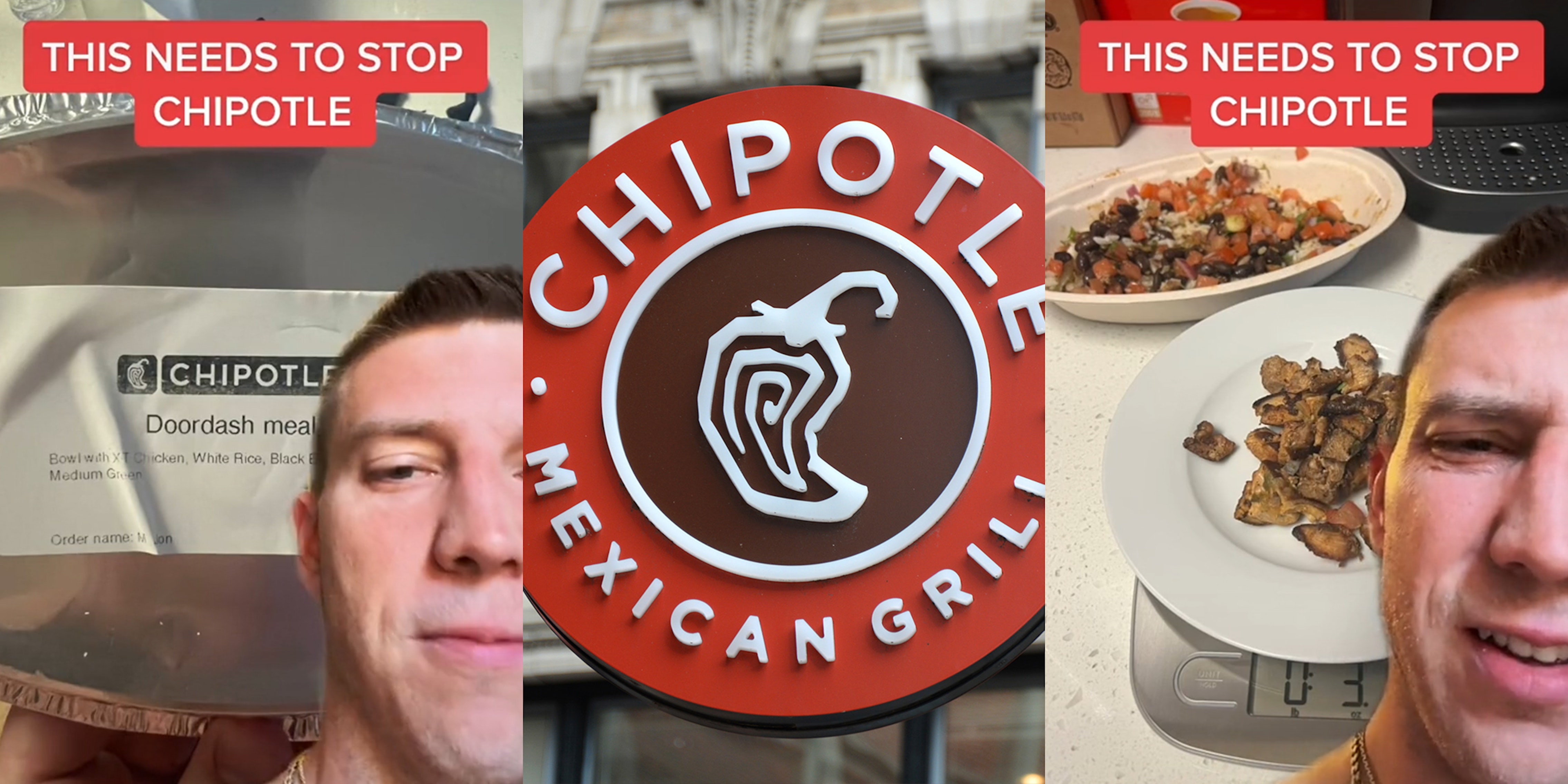 ‘I stopped ordering Chipotle on DoorDash cause they always do this’: Man weighs portion size after ordering a double-chicken burrito bowl

'I get it almost every day.'

Does a double meat order from Chipotle actually contain double the meat? One TikToker certainly doesn’t think so.

In a now-viral video, TikTok user Jon (@jm.fit) showcases his recent online order from Chipotle, which he says he ordered with “double chicken.” When he measures out the chicken, it weighs in at only 3.1 ounces—which is under Chipotle’s stated serving size of a single portion of chicken, 4 ounces.

“I get it almost every day,” Jon says of the double chicken burrito bowl. “Look at this shit!”

The video then shows his supposed portion of chicken on a scale, which reads 3.1 ounces.

“Like, what the fuck?” he asks. “Enough is enough. This shit needs to stop.”

According to the label on the bowl, Jon ordered his meal through DoorDash.

In 2015, Insider broke down a Chipotle burrito bowl into its requisite parts. While Insider found the company’s calorie count to largely be accurate, it noted the chicken weighed in at only 2.9 ounces, just under Jon’s “double chicken” weight and a full ounce below Chipotle’s stated weight of 4 ounces.

Recently, many users online have complained about their Chipotle orders—specifically their online orders—appearing smaller than they once were. In 2021, Insider documented numerous complaints from around the web surrounding Chipotle’s shrinking size.

“Why would your employees make a burrito this small? This is crazy,” wrote a Twitter user, quoted by Insider. “I feel extra ripped off because it was an online order and they knew I couldn’t say anything.”

The latter point may be accurate, and Chipotle has admitted as much. Documented by Eat This, Not That, Chipotle CFO Jack Hartung explained at a conference how online ordering has changed the ordering process, allowing crew members to be more “consistent” with their rations.

“…Our portion sizes are much more consistent because there’s not somebody pointing at every single pan,” he explained, according to Eat This, Not That. “The crew will see just the way that a customer is looking at them and think, ‘Oh, I better put another scoop in.'”

But this still does not explain Jon’s issue, nor the issues of many other commenters on TikTok who complain about portions under Chipotle’s stated sizes. Chipotle also reportedly opted to raise its prices yet again, elevating menu prices by 4% at the end of the first quarter of this year.

On TikTok, users advised Jon that the only course of action he could take to ensure proper portion sizes is by physically going to Chipotle.

“I stopped ordering chipotle on DoorDash cause they always do this,” a commenter claimed.

Some even advised that Jon report this incident to corporate, saying that he could get some freebies for doing so.

“Call corporate chipotle and tell them what happened providing them proof,” a commenter wrote. “They supposedly have incredible customer service and will probably give you a QR code for a free two person adult meal dinner including drinks side and chips.”

The Daily Dot reached out to Jon via Instagram and Chipotle via email.