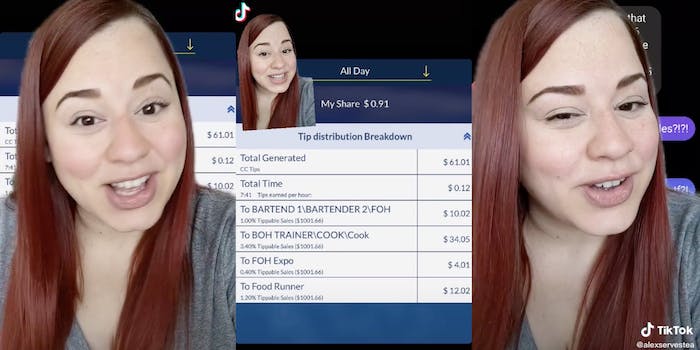 Some servers even report owing money after pooling tips.

A TikToker is exposing Chili’s tip distribution practices that require servers to tip out back-of-house employees, leaving them with significantly less money in tips and even putting them in the red.

@AlexServesTea has dedicated her TikTok to calling out Chili’s and other restaurants that have allegedly exploitative practices. As such, she receives a lot of messages from other folks who claim to work or have worked at Chili’s, sharing their own experiences with the franchise.

One set of videos that has racked up over 350,000 views explains just how little servers make from tips due to regulation changes under former President Donald Trump. In December, the Labor Department published updated tipping rules, featuring one that allows restaurants to create “nontraditional” tipping pools that include back-of-house staff that do not typically get tipped out.

“Chili’s, I’m sorry, but this is abuse to your staff,” Alex said, sharing a screenshot a current server sent her, breaking down their tips for a day of work. “You’re making your servers pay your entire staff.”

The screenshot showed the percentages that the server had to tip out to the bartenders, cooks, hosts, and food runners. Of $61.01 in credit card tips, the server who sent in the screenshot kept only $0.91.

Skeptical viewers were quick to point out that this was specifically referencing credit card tips, which left Alex to explain something even more egregious.

“This whole tipping out thing is not based on our tips, it’s based on our sales,” she claimed. “So even if we don’t get tips, we have to pay it out of our pockets—hence why some people are in the negative.”

Sure enough, a follow-up video featuring a screenshot of a tip payout from another Chili’s employee showed that of their $37.16 in credit card tips, after tipping out their required 5.5% of total food sales from that shift, they actually owed $3.05. Alex said this would be regardless of whether they had made any cash tips or not, meaning the server would have to pay the $3.05 from their cash tips or get it taken out from their paycheck later if they had not received any cash that day.

Servers in the comments say that exploitative tip practices are nothing new, but workers advocacy groups have argued that the Trump-era regulations were making it easier for restaurant owners to pass on more of the payroll costs to employees and customers. One advocate told the Washington Post that the new rules might “open a Pandora’s box,” potentially letting employers lower wages for kitchen workers and using server’s tips to make up the difference.

Chili’s certainly isn’t the only restaurant to implement tip pooling, or to include back-of-house workers in that pool, but these places are coming under increased scrutiny as the U.S. begins to open back up—particularly with restaurants complaining that nobody wants to come back to work.

“Maybe take care of your fucking people, and you would have people who want to come back and work for you,” Alex said.

In a statement to the Daily Dot, she added: “It’s not ok for people to work their asses off just to have to PAY to work there! When servers are only walking home with half of their tips and Togo specialists are paying OUT OF POCKET to tip out the cooks, there is a problem!”

The Daily Dot has reached out to Chili’s for comment.