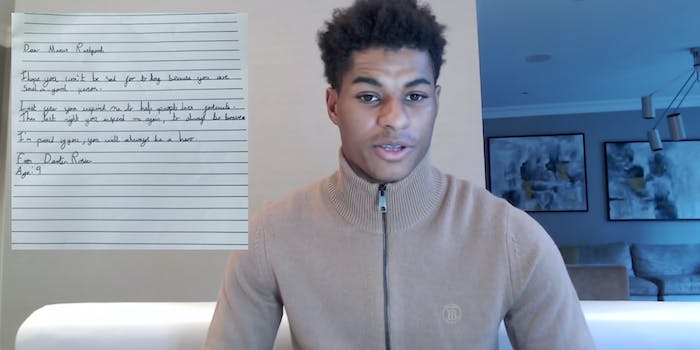 ‘You will always be a hero’: Child’s heartbreaking letter to Black soccer player who was racially abused goes viral

'Last night you inspired me again, to always be brave.'

One of three Black soccer players from England’s national team, who was racially abused online following the team’s loss to Italy in the Euro final on Sunday, shared support from fans—including a number of children—who sought to counter racism with love.

Marcus Rashford, whose Twitter account reflects that he holds an MBE (Member of the Most Excellent Order of the British Empire) for his charity work involving “vulnerable children” during the pandemic, was one of three English players to miss penalty kicks to decide the outcome of the quadrennial European soccer tournament.

All three players who missed penalties happened to be Black; Jadon Sancho and Bukayo Saka, along with Rashford, endured racist abuse online following the match, including monkey and banana emoji posted to Saka’s Instagram account. A mural of Rashford in Manchester, where he plays his professional soccer with Manchester United, was also defaced in reaction to the match result.

Rashford posted an explanation of the missed penalty to Twitter, discussing his difficult past season—including a Europa League final loss in May for which he also endured racial abuse online. He admitted, “My penalty was not good enough, it should have gone in,” but then he followed that with, “But I will never apologize for who I am and where I came from.”

The message concluded with him proudly declaring his identity as a Black man and thanking those who extended kind words.

He then followed that up with a trio of handwritten letters from children who showed support for Rashford, including one from a 9-year-old who said, “I hope you won’t be sad for too long because you are such a good person.”

He also shared a photo of the mural in its evolving form. The mural “was defaced with several swear words” following the loss, according to the BBC, but then after the graffiti was covered up, a number of well-wishers began putting up kind notes on the mural.

Football Daily showed a timeline of the evolving mural on Twitter.

And among the fans who came to Twitter to praise it was one who said, “Came down to the Rashford mural, and there are so many people here. From as far away as Birmingham & Rotherham. All different ages and ethnicities. Parents bringing young kids & educating them about racism. Local businesses giving out free refreshments. I am in BITS.”