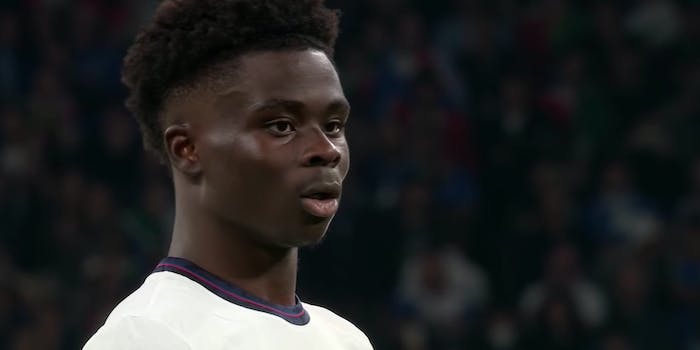 Sunday’s Euro 2020 final between Italy and England came down to penalty kicks after the teams dueled to a 1-1 draw, and Italy triumphed 3-2 in that sequence. A trio of England’s young Black players—Marcus Rashford, Jadon Sancho, and Bukayo Saka—weren’t able to convert their penalties, and racist fans abused the players on social media in the aftermath, to the chagrin of other fans and observers.

England hasn’t won a major soccer tournament since 1966, and after Luke Shaw got the Three Lions into the lead in the second minute, it looked as if it might finally win a trophy of note. But Italy would ultimately win the tournament delayed a year by the COVID-19 pandemic (hence the Euro 2020 moniker), and some fans made their frustration known through crude racial abuse.

Baker then reconsidered, “I know shocking is the wrong word to use because we’ve come to expect this and that shows how fucked up this world is in 2021. I should have used the word disgusting or vile.”

Rashford is no stranger to this kind of racial abuse. He plays professionally for Manchester United, and after his team lost the Europa League final to Villarreal in May, he went public about the racial abuse he experienced on social media.

He took to Twitter after that final to post, “At least 70 racial slurs on my social accounts counted so far. For those working to make me feel any worse than I already do, good luck trying.”

In a followup tweet, he noted that one of the racists was a math teacher. “He teaches children!!” Rashford marveled. “And knows that he can freely racially abuse without consequence…”

With Sancho moving to Manchester United from German club Borussia Dortmund less than two weeks ago, the trio of heralded players will resume playing professionally in England when the nation’s top professional league, the Premier League, starts up Aug. 14.

As the BBC reported, the Football Association—the governing body for soccer in England—condemned the racist actions of the fans responsible, saying, “We could not be clearer that anyone behind such disgusting behaviour is not welcome in following the team.”

“We will do all we can to support the players affected while urging the toughest punishments possible for anyone responsible,” it said in a statement. “We will continue to do everything we can to stamp discrimination out of the game, but we implore government to act quickly and bring in the appropriate legislation so this abuse has real life consequences.”

The statement appeared to pin some responsibility on social media platforms, like Twitter and Instagram, noting, “Social media companies need to step up and take accountability and action to ban abusers from their platforms, gather evidence that can lead to prosecution and support making their platforms free from this type of abhorrent abuse.”

The BBC noted that UEFA, the governing body that oversaw the European tournament, also condemned the abuse. It also reported that at least one fan was identified, and as a result of indulging in racial abuse, was banned for three years from attending matches for a London-based club, Leyton Orient—presumably, the club the fan supports.

Fellow English player Jude Bellingham, who was also Sancho’s teammate at Dortmund, stuck up for his Three Lions teammates on Twitter. “We win together and we lose together,” he proclaimed. “So proud to have teammates with such top character.”

He then added, “Takes huge bollocks just to volunteer,” referring to the players stepping up to take penalty kicks on such a huge stage. (England manager Gareth Southgate inserted Sancho and Rashford as late-match subs specifically to take penalty kicks—a move that some criticized after the match, insinuating that he put the players in bad spots.)

Bellingham also observed, “As for the racism, hurtful but not surprising. Will never get bored of saying that more needs to be done. Educate and control the platforms!”