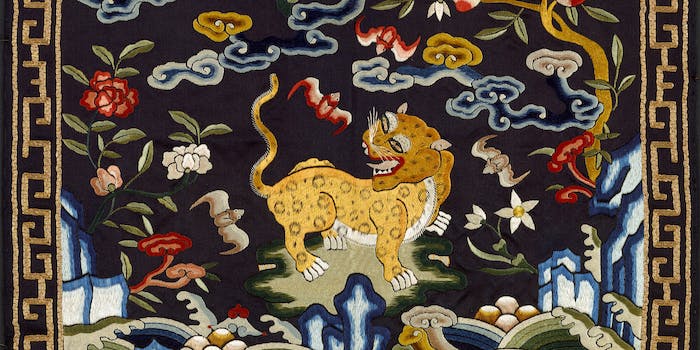 The Centers for Disease Control and Prevention (CDC) used Chinese imagery to illustrate emerging infectious diseases in an Instagram post that has since been removed.

The CDC showcased its cover for its upcoming May issue on infectious diseases in the Instagram post. According to screenshots shared online, the post’s caption referred to the imagery’s history.

It explained that the imagery is an 18th century Qing military rank badge, which “depicts a muscular leopard standing on a small piece of light brown, green-tinged land amidst flowering plants and fruit trees. The surrounding sky is filled with swooping bats and tendrils of clouds.”

The post claims the animals depicted in the imagery are capable of “transmitting viral pathogens that can cause respiratory infections in humans.”

“Bats, a mainstay on many badges because of their association with good fortune, are reservoirs for Hendra and Nipah viruses and for the severe acute respiratory syndrome (SARS) coronavirus,” the the post read, adding that coronaviruses can also be found in other species as well.

This description, along with the image, is still available on CDC’s website as of publishing time.

On Tuesday, Xiaoyu Weng, a curator at the Solomon R. Guggenheim Museum, posted a screenshot of the Instagram post to her story, calling it “an ignorant, foundationless attack on Chinese cultural heritage.”

“Many of these symbols were used and have been used in various contexts in Asian culture and have rich meaning and knowledge behind them, the bat is a representative,” Weng told the Daily Dot on Wednesday. “You can see such symbols featured in historical art objects in museums like the Met, for example. By stripping free of the complexity, this association with COVID-19 is a baseless and very irresponsible way to disseminate fake knowledge.”

Weng told the Daily Dot that some had told her they reported the post to Instagram, so it’s unclear whether the platform took down the image or if the CDC removed it.

Twitter user @jadeitecabbage also shared screenshots of the post to Twitter, writing, “truly what better way to stoke up anti-asian sentiment while indulging in a hellish new take on orientalism.”

A screenshot captured by @jadeitecabbage and shared with the Daily Dot shows one commenter vilifying China and accusing the CDC of “glorifying the people of the country who infected the US.”

However, Weng captured screenshots of the backlash the CDC received on the Instagram post before it was removed.

“It’s a very inappropriate post to use Chinese cultural symbols to make a connection with Coronavirus,” one commenter wrote. “It’s not educating, it’s humiliating.”

There has been an uptick in anti-Asian racism during the pandemic. There has been a reported increase in hate crimes against Asians after the disease was said to have originated in Wuhan, China. President Donald Trump and members of his administration also tried to gain momentum around using the term “Chinese virus” to describe the coronavirus, which some believe exacerbated the racism.

“It is insulting and dangerous, and a form of silent violence to power manipulation,” Weng said of the CDC’s use of the imagery. “Such information continues to exacerbate the systematic racism and cultural prejudice exposed by this pandemic. They should have consulted curators, art historians who have produced real knowledge and scholarship on these materials if they would like to engage such topic.”

The CDC did not respond to the Daily Dot’s request for comment.