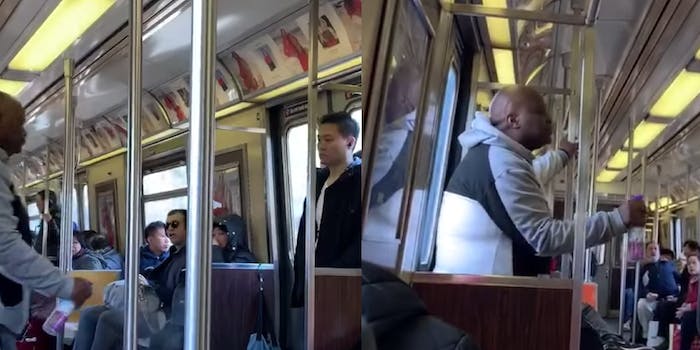 It's the latest racist incident amid coronavirus fears.

Amid heightening fears over reports of coronavirus in the U.S., there have been multiple accounts of racist attacks on Asian people. In the latest attack, a Black man on a subway train demanded that an Asian man not stand next to him, then sprayed him with air freshener.

The incident was documented in a series of now-viral videos and shared on Facebook on Wednesday by user Doris Au.

The first clip shows an Asian man standing by the door on a moving train. There is enough space for another individual to either exit or stand next to him, and the train has many empty seats.

Suddenly, a man standing opposite from the Asian man yells to someone who is not visible in the video, “Tell him to move!”

“Why does he have to move?” says a woman who can’t be seen.

“Because he’s standing right fucking next to me,” the man yells.

He then approaches the bench next to the man, picks up a spray can, and says, “You’re not gonna move?” He sprays the contents of the can toward the Asian man.

“Move!” he repeats, along with something else inaudible. The Asian man remains calm, and a dozen or so people are seen sitting behind him. The man sprays him for at least 15 seconds before the video ends.

In another video posted by the same user, the Asian man addresses the attacker, who is now seated.

“Why is that? Why can’t I sit next to you?” the Asian man says, moving toward the other man.

A passenger then escorts the Asian man to the other side of the train.

On Thursday, amNewYork reported that police are investigating the incident and confirmed the man was using a Febreze air freshener.

The first video has received more than a million views, and the second one has had almost 200,000 views since being posted on Wednesday. The Facebook user who shared the video did not respond to the Daily Dot’s request for comments.

“I feel so bad about this video. What is wrong with someone people?” one user commented.

Many were furious that so many passers-by watched and did nothing.

“Why isn’t anyone upset that people videotape this shit instead of actually speaking up and defending people in these positions??” one person wrote.

And because the attacker is Black, many said that he may have been the victim of racism at some point in life and could’ve done better. But comments on the video led to racism toward the Black man. A Black user who engaged in a few comments and sympathized with the victim received responses with the N-word, according to screenshots she shared.

Commenters also brought up the well-documented history of racism Black people face from Asian communities in Asia and the U.S.

The Metropolitan Transportation Authority shared the video on Thursday and reiterated official statements asking people to wash hands and practice caution, adding that “racism” doesn’t stop the spread of coronavirus.

By Friday morning, the U.S. had reported 12 coronavirus-related deaths.