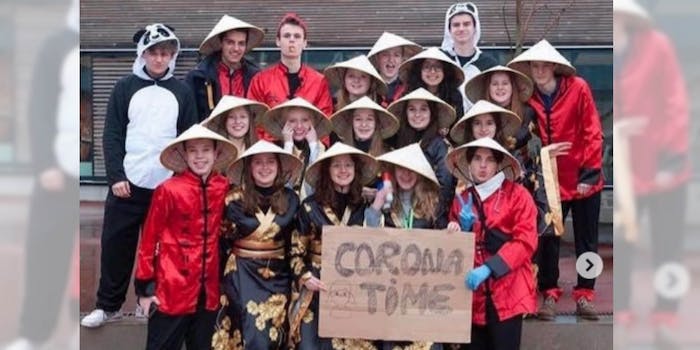 The college posted the photo of the students.

A group of Dutch students is on the receiving end of backlash over a photo of them wearing traditional Chinese clothes, making racist gestures, and posing with a sign that read, “Corona Time.”

As the coronavirus (COVID-19) continues to escalates worldwide, people have been responding in unusual ways.

Many have started panic shopping. Some have turned to humor to lighten the gravity of the situation–as in the release of a song on TikTok, dubbed “It’s Corona Time.“

Yet on social media, Asian people have shared anecdotes of racial prejudice directed at them.

It still came as a surprise when Sint-Paulus Campus College Waregem, a Dutch secondary school in Belgium, posted the now-deleted photo to its Instagram and Facebook pages.

Broodje Kaas Met Sambal–an awareness group addressing racism against the Asian community in the Netherlands–reposted the picture and called the school “irresponsible.”

On Twitter, a user with the handle @WaregemC created a fake account pretending to be the students to roast them publicly.

After going silent, the school eventually addressed the issue.

In a statement made to a Dutch newspaper, campus director Philip Demuynck issued an apology on behalf of the students.

“Neither the school team, nor the students in question, have intended to hurt this photo. We want to apologize explicitly, because we had not correctly estimated the consequences,” he stated.