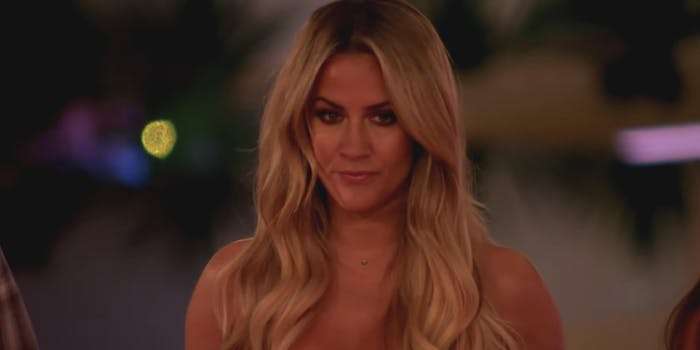 The story was about a Valentine's Day card mocking Flack's assault allegations. The former 'Love Island' host was found dead in her home on Saturday.

After former Love Island host Caroline Flack, 40, was found dead in her home on Saturday morning, some are placing the blame on the media for mocking her as recently as the day before her death.

Flack hosted the popular British reality series for nearly 200 episodes. In 2019, she stepped down from the role following a domestic assault charge against her in which she was accused of hitting her boyfriend Lewis Burton with a lamp, allegations both Burton and Flack reportedly denied.

In preparation for the trial, which was slated to begin in just a few weeks, British illustrator Samuel Hague created a Valentine’s Day card featuring a cartoon drawing of Flack, alongside the sentiment: “I’ll Fucking Lamp You.”

The Sun highlighted the card on Valentine’s Day, with the headline “Brutal Caroline Flack Valentine’s Day card mocks troubled star with ‘I’ll f***ing lamp you’ message.” While the article itself didn’t appear to take a specific stance on the card, it did quote Hague as questioning why this particular card warranted an article at all.

And in a particularly notable move that drew a lot of negative attention, the tabloid appears to have subsequently removed the article (still accessible through an archive) from its site following the news of Flack’s death.

“As if The Sun couldn’t sink any lower, yesterday they posted an article about a card mocking Caroline Flack which they’ve now deleted & started paying tribute to her instead,” Twitter user @JoeSaunders wrote. “Press in this country needs to be regulated and held to account for the vile stuff they post. Disgusting.”

Others shared Saunders’ distaste for what is being seen as The Sun‘s attempt to save face and rewrite its part of the narrative surrounding Flack’s death, which a lawyer for the family confirmed was a suicide.

“Nobody will know what made her do it but you can bet all the media contributed to it,” Twitter user @RangersSparess wrote, along with a screenshot showing the broken link where the article used to be. “They’ll do ANYTHING for a story.”

And some felt the hypocrisy was further exacerbated by The Sun using Flack’s death to promote its “You’re Not Alone” suicide prevention campaign, first launched in 2018.

And while many are calling out The Sun directly, others are pointing out that it isn’t the only British media with a history of relentlessly mocking Flack, or other British personalities, while then turning around and offering seemingly empty words of condolences over the Love Island star’s passing.

“The sheer audacity of someone like Piers Morgan dedicating a post to Caroline Flack,” Twitter user @laurenquig90 wrote. “The same man who berates women like Meghan Markle and the young Greta Thunberg on a daily basis. It’s words like YOURS Piers that have a devastating effect on people in the spotlight.”

Hague has removed the Valentine’s Day card mocking Flack from his website and deleted his social media accounts.