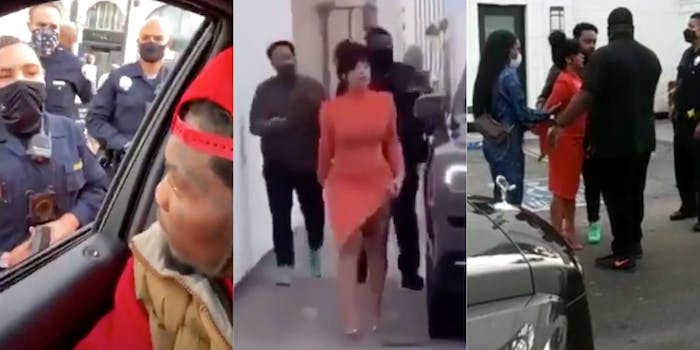 'Y'all got guns out. I'm not [going to] move my hands from my steering wheel.'

Cardi B had an altercation with Beverly Hills police on Saturday after her husband, rapper and Migos member Offset, was detained in California after being stopped for waving a gun through a MAGA rally.

Multiple videos were taken as the “WAP” rapper get out of her car and approached the police, who were in the course of detaining her husband. She can be seen swiping away at police and later screaming at them to let Offset go.

The 28-year-old Offset (born Kiari Cephus) went on his Instagram Live and recorded the officers ordering him out of his vehicle after accusations of him “waving guns at people.”

In the video, now viral on social media, Offset tells the officers he is not getting out of the car, fearing for his safety: “Y’all got guns out. I’m not [going to] move my hands from my steering wheel.”

After an officer explains the allegation, he says: “I’m a celebrity; I’m Offset from the Migos. They’re fans; that’s why they’re following me.”

With no less than four officers on his side of the car, he also informs them that a Trump supporter hit his car with a Trump flag.

He still refuses to get out of the car and tells them he has “25,000 people” on his Live, and they would be “sued publicly.”

Another officer, wearing a “blue lives matter” mask, tells him not to move and unlocks his car door from the outside. Offset tells him that “you can’t just open my door; it’s illegal.”

He’s then pulled out of the car, but the video ends.

According to the Daily Mail, Beverly Hills police released Offset without charge. Cardi B’s cousin Marcelo Almanzar was arrested and charged with carrying a concealed weapon and carrying a loaded firearm in public but was later released on bail.