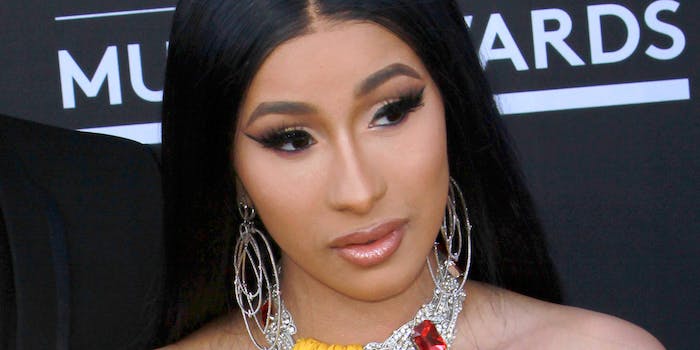 Cardi says she and Offset are 'simply dysfunctional.'

Cardi B and Offset were reportedly filing for divorce last month, but yesterday on Instagram Live, she conveyed that they’re not actually getting divorced, after the two were spotted kissing at her birthday party.

This led to speculation on social media about the state of their relationship—this isn’t the first time she’s said she’s leaving Offset—but Cardi took offense to one tweet that insinuated she’s in an emotionally abusive relationship.

“Abusive?” she responded in a now-deleted tweet. “Girl I’m the one that do the hitting and the shit talking.” She added that people are “trying to analyze too much we are just simply dysfunctional.”

Cardi subsequently posted a fake-out apology “for living my life,” then followed that up with another video addressing people saying she’s in a “mentally abusive relationship” and needs to be saved. She insinuates that sex with her husband is preferable to the random men sliding into her DMs and saying, “What up, big head?”

She responded to another tweet about people’s opinions on taking Offset back: “I just don’t understand is like they want me to stay single and fuck on their father ….shit is crazy.”

This all comes the same week Cardi accidentally uploaded a nude photo to Instagram, and though it was quickly deleted, she later said, “everybody and their mom saw my big-ass salami-nipple titties.”