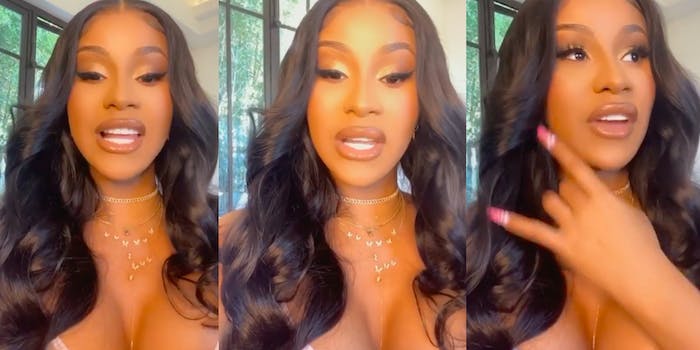 Cardi B is now on OnlyFans

The rapper also revealed what kind of content she'll be posting.

Following the release of her most recent track, “WAP,” a collaboration with Megan Thee Stallion, Cardi B announced that she created an OnlyFans to share exclusive content with her fans.

In an Instagram video, she told her fans that her OnlyFans page was now live with behind-the-scenes footage from the music video shoot. The 27-year-old rapper tells her fans she will not be posting “my titties, or my pussy, or my ass,” but rather “straight up real-life content shit” because fans are “mad nosey when it comes to my life.”

There is, however, a $4.99 paywall to access the new, exclusive content. When the page first went live, Cardi was charging $10 but brought the price down. “Ummm I did not know my onlyfans was charging ten dollars, she tweeted,  “I’m bringing it down to 4.99. Ya spend too much on vinyls and my merch coming next week.”

Card’s fans are also excited the superstar rapper launched her own page on the platform. “Cardi B’s onlyfans is only $4.99? I thought it be way more lol,” a fan tweeted.

“Cardi B made an onlyfans. My good sis is smart,” another fan said.

Cardi is not the first celebrity to join OnlyFans, but she is one of the biggest. Rapper Rico Nasty also announced on Wednesday that she created an OnlyFans with a sneak peek for her new song, “iPhone,” which is set to be released tomorrow.

“To see a very exclusive sneak [peek] to [iPhone] you can watch it on my onlyfans,” Rico tweeted earlier today, “Where you will always get to experience content early before it drops everywhere else.”

Rico and Cardi join Blac Chyna, Safaree Samuels and Erica Mena, The-Dream, and YouTuber Tana Mongeau, among others, to be a celebrity with an OnlyFans account.