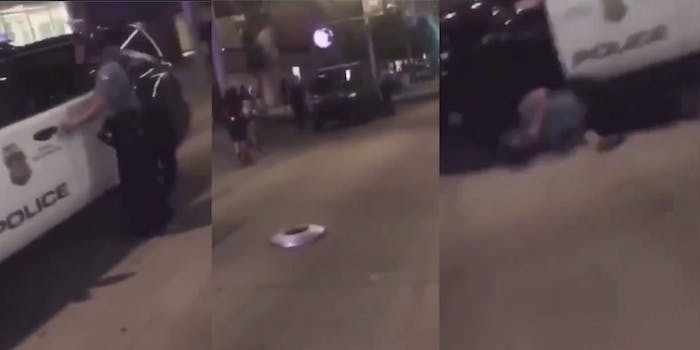 A recent video has surfaced showing a Minneapolis police officer injured after he was stuck with a trashcan lid thrown by a nearby protester. In response, people are comparing the incident to that of something you’d come to expect from a scene in Marvel’s Cinematic Universe.

In the video, the officer is seen heading for his patrol car and attempting to open the door just moments before a metal lid that appears to be taken from a trashcan flies into view and hits him on the back of his head and neck. The force of the object leads the helmet-clad officer to fall to the ground, nearly underneath the vehicle.

According to a Newsweek report, the video was captured on a Wednesday night Facebook Live broadcast taken during protests in the city. It was later shared to social media where it has been reposted and shared over 30,000 times. “Captain America” began trending shortly after, based on the video.

According to the Twin Cities Pioneer Press, Wednesday night’s protests were sparked by the fatal shooting of 61-year-old Eddie George Gordon, whose death was ruled a suicide shortly after it occurred.

Many residents of the city suspected that the shooting had taken place between Gordon and an officer, causing outrage just months after George Floyd was killed by Minneapolis police during an arrest. Amid the protests, over 130 arrests were made by multiple law enforcement agencies for rioting, looting, damage of property, and violations of curfew.

As reported by the Twin Cities Press, the sergeant officer was later treated at a hospital and released. In a press conference, Minneapolis Police Chief Medaria Arradondo stated that without protective gear “it could have been a lot worse.”

In response to the short clip of the Captain America protester, it was quickly memed with users piecing it together with actual footage from the Marvel Cinematic Universe.

Another wrote, “Glad to see Captain America is doing his part.”

While some found humor in the comparison, others expressed concern about the display and its praise.

One tweet pointed out the arc of Captain America as a perfect allegory for debates that ensued around the “good cop, bad cop” narrative sparked from the video, saying “Keep in mind that Cap realized that the organization he worked for was evil. Then decided that his silence was complicit and needed to be dismantled from within, so this narrative fits… More than I can say for real life officers of the law.”