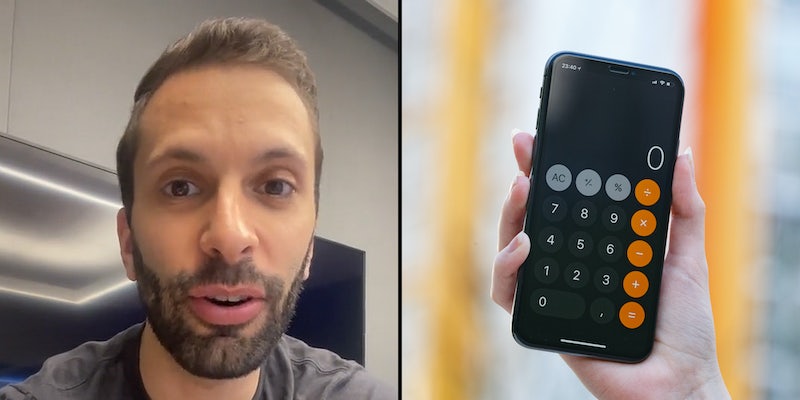 ‘Facts. And now we are getting divorced’: Man exposes secret calculator app that men reportedly use to keep nudes

Infidelity is a topic about as ancient as humanity itself. Ancient Greek figures tackled the topic through theatre and mythology, Shakespeare wrote about it a bunch, and even Ralph Breaks the Internet discusses this same subject, just in a platonic way.

Cheating is a very common phenomenon: 75% of men and 68% of women have admitted to creeping around with another while they were in a relationship in one capacity or another.

The act of infidelity has also been shaped by technology these days as well, making it easier for folks who are looking for “extracurricular” relationships to find like-minded people. However, it could also be a double-edged sword because if you’re sliding into folks’ DMs with your actual online social media profiles, there’s a good chance you’re going to get either found out via screenshots or placed in a compromising position.

There’s still the issue, however, of keeping one’s communications protected from prying eyes. There are tons of different applications that allow people to do just that. Sure, Google Photos and Apple’s stock photo app have the “locked folder” option usually hidden in its utilities or settings menu, but this is common knowledge.

There are some clandestine apps, however that are designed to disguise infidelity, as highlighted in a viral TikTok by @nuggetonair.

In the clip, he looks into the camera and says, “If you’re dating a guy and you go into his phone and you type in the world calculator and he has two calculator apps he’s cheating on you because one of them is a secret photo album for nudes.”

It appears that the application the TikToker is referring to is available on Apple’s app store, called Calculator#, and tons of folks are familiar with its functionality.

“Facts. And now we are getting divorced,” one TikToker said.

Others accused the creator of being in extreme violation of the “Bro Code.”

Others say it’s not necessarily a gender thing, but a privacy one: “I’m a girl and I have a secret app.”

Others said that they downloaded scientific calculators on their smartphones because the standard one their device came with doesn’t have the functionality required.

One user said, “Ugh I have 2 and I’m not doing anything wrong … ez is better than the iPhone.”

While there are studies that indicate men cheat more than women in relationships, there are some reports, like a 2015 Indiana University study that says men and women are in a “statistical dead heat” when it comes to infidelity.

Once a cheater, always a cheater, right? Evidently not. Dr. Diana Kirschner shares in Psychology Today that infidelity can be overcome.

“Research studies show that even among married couples, cheating is relatively common: about 22% of men and 13% of women cheat,” she writes.

She continues, “But the good news is this: Many people who are in committed relationships that have decent chemistry and benefits for both partners can actually work through the crisis of affairs. Not only that, their relationship can become more intimate and they can put an end to cheating once and for all. This means that, ‘Once a cheater, always a cheater’ is just not true. There are people who learn and grow from the painful emotional hurricane and the loss of closeness in the relationship that are the aftermaths of cheating.”

The Daily Dot has reached out to Nugget on TikTok for further comment.