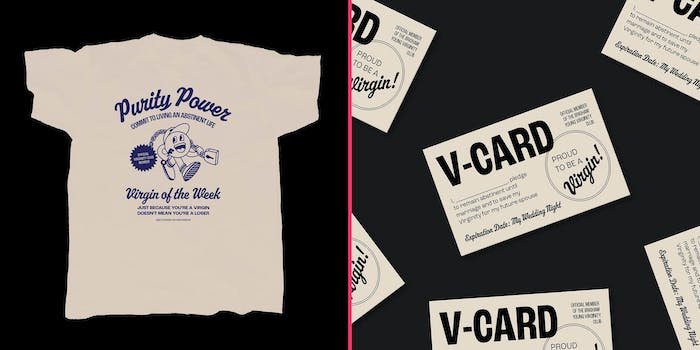 “What does the Bible say about Hot Girl Summer?” begins a recent post from the Brigham Young Virginity Club.

After acknowledging that a year and a half of quarantining might make sex seem appealing, the account says that “the Bible warns us against the sinful nature of Hot Girl Summer,” and offers an alternative: “Pious Girl Summer.”

“A summer full of scriptures, sun, and self improvement through religious purity, ” the post continues. “And remember: modest is hottest!”

The account, which describes itself as a “Utah-based club dedicated to preserving and promoting virginity on college campuses,” has been posting since September. Its first post declaring that virginity is still sacred “despite the harmful messaging in modern media.”

But as its fluidity in the language of memes and hot topics from Lil Nas X to the “butthole loophole” pushes the account into the mainstream, some are increasingly convinced that it’s an elaborate satire of conservative church culture.

The Virginity Club’s name and teachings derive from the Church of Jesus Christ of Latter-day Saints (widely known as the Mormon church). At first glance, the account seems associated with Brigham Young University (BYU), a private school in Provo, Utah, affiliated with the church.

But an administrator of the account, who said they are a current BYU student and declined to share their name, told the Daily Dot in a phone interview that the club is not a part of the school or “sanctioned by the university in any way.”

Though the admin admits that they use humor when creating posts, they told the Daily Dot that the account is definitely not satire.

“There’s definitely been a lot of speculation,” the admin told the Daily Dot. “But at a certain point, there’s only so many times we can say [the account is not satire].”

In posts, the club says that inquiries about whether or not the account is satirical “proves the premise” of the club, “which is that virgins are unfairly stigmatized in modern society.”

@BYUVirgin’s definition of virginity and premarital sex is expansive. In a post addressing the “butthole loophole,” the Virginity Club says that “traditional definitions of Virginity are outdated and heteronormative,” which points to the fact that many people have sex in ways that don’t involve penetrative, “penis-in-vagina” sex.

Correspondingly, the Virginity Club has declared support for the LGBTQ community. One post borrowed the language of “coming out” to instruct followers how to share their virginity with a friend or partner.

“This post is not meant to compare Virginity stigma to the stigma faced by LGBTQ individuals,” the caption on the post clarified. “We support the LGBTQ community at BYU and around the world!”

Most of the Virginity Club’s posts, however, have to do with ending the “stigma or unfair treatment” that the club alleges virgins receive. As @BYUVirgin wrote in an Instagram story calling out virgin jokes, the admins of the account see virgins as a marginalized group.

The admin who spoke with the Daily Dot said they understand that the stigma they feel they face as a virgin is different from other stigmas, such as racial stigma, and is much “smaller.”

“But it’s not a zero-sum game,” the admin told the Dot. “Some stigmas are going to be worse than others.”

The Virginity Club said it doesn’t discriminate against those who don’t abide by ideals of abstinence, though. Some of its “Virgins OTW,” a weekly spotlight that shouts out one of their followers, have been non-virgins.

But some “Virgins of the Week” aren’t convinced of the account’s sincerity.

Lily Bitter, a BYU alumna who is no longer a member of the church, said she thinks the account is satire and a clever takedown of the “virginity culture” at BYU. Sam Cosgrove, a current BYU student and member of the church, takes the university’s message of “no pre-marital sex” very seriously—but doesn’t believe the club’s posts are sincere.

“Regardless of if the person behind it is being satirical or being serious,” Cosgrove told the Daily Dot, “I think it’s one of the funniest things that’s happened at BYU in a long time.”

Both the admin and Bitter said they thought a majority of BYU’s student body are members of the church who abstain from premarital sex. Of the university’s 36,000 students, 98% were reportedly church members in 2019. Church members also receive discounted tuition. (BYU did not immediately respond to the Daily Dot’s request for comment.)

The admin said they were inspired by the growing following. “Many of [the followers are] young people coming to our account for inspiration, for uplifting messages to help them stay strong and stay true to their values,” they told the Daily Dot.

The admin also told the Daily Dot that BYU has refused to incorporate the club as an official entity of the university. They believe that school officials think their account talks too much about sex; however, a petition created on the account’s behalf says that “even BYU drifts closer and closer towards sin and obscenity.”

There are other ways that the account strays from the university’s publicized values, such as its blatant support for the LGBTQ community.

In February 2020, the university removed a rule from its honor code that Cosgrove said was dubbed the “homosexuality clause” because it prohibited students from having “homosexual feelings” and engaging with any related behavior. The university reaffirmed its support for the rule only a month later.

“We feel like there’s a line you can walk where you can promote chastity and destigmatization and rigidity, while simultaneously being inclusive of people of all kinds,” the Virginity Club admin told the Daily Dot. “Even if they’ve maybe had sex in the past.”