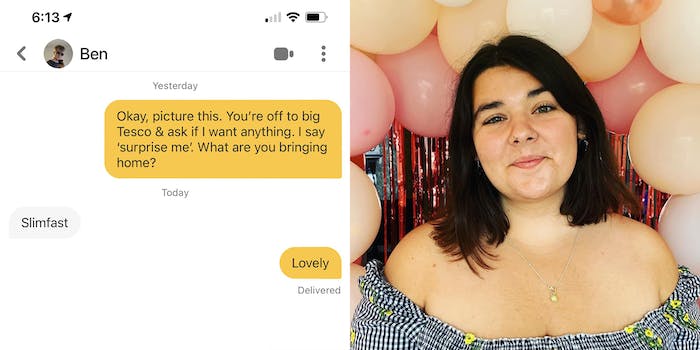 Why match with someone if you're going to do this?

There’s no shortage of fatphobia when it comes to dating apps, but it’s an extra level of baffling when someone matches with a user just to shame them.

Twitter user Florence Simpson shared her experience with this weird phenomenon after she matched with a user named Ben on Bumble.

“OK, picture this. You’re off to big Tesco & ask if I want anything. I say ‘surprise me.’ What are you bringing home?” she asked him as an ice breaker.

Flo posted a screenshot of their chat to Twitter, noting that her opening question usually prompts “hilarious responses,” but this one was obviously just not it.

“I do not care if he doesn’t find my body type attractive,” she added. “I care that he consciously chose to match with me just to be rude to me.”

People were not amused with Ben’s dig or the audacity it took to match with someone seemingly with the intent to just shame them.

“Makes me sick how men think it’s okay to treat women like this. I get so many awful things sent to me and when I say I’m not looking for just fun they try and convince me that’s what I want and get pissy when I say f-off!” @claire_tropic commiserated.

Flo’s screenshot had a wide enough reach that Bumble actually took note and sought out the user in question.

“Rude and abusive behavior is never acceptable in the Hive, and we want you to know we’ve got your back,” the company wrote, adding that Ben was blocked from the platform entirely.

The one upside to the whole debacle is that so many people loved Flo’s creative opening line that they’ve decided to steal it for their own. Hopefully, the responses the pour in for them and Flo in the future are of a much higher caliber than Ben’s fatphobic dig.