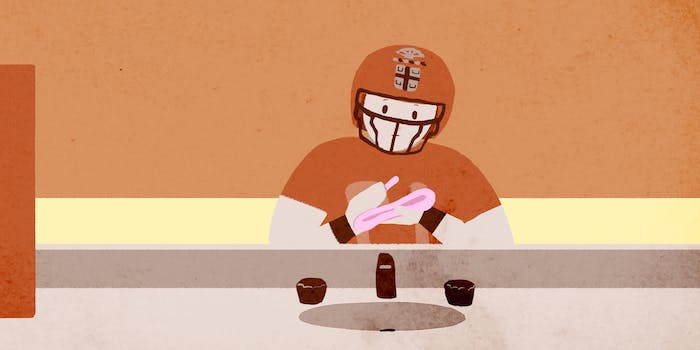 Women aren't the only ones with periods.

A student-led initiative to place free tampons and pads in Brown University bathrooms has a notable twist.

The tampons are going to be in the men’s restrooms too.

The college’s student body president Viet Nguyen told Newsweek that “pads and tampons are a necessity, not a luxury,” and that a group of about 20 students are fanning out across campus to fill all nonresidential bathrooms with free menstrual products.

“We wanted to set a tone of trans-inclusivity, and not forget that they’re an important part of the population,” Nguyen told Newsweek on Tuesday. “I’d be naïve to say there won’t be push back. I’ve had questions about why we’re implementing this in male bathrooms as well. It’s an initial confusion, but people generally understand when we explain it.”

Though not an official campus policy (the university administration hasn’t issued a statement yet), the student-finance-board initiative raises awareness about the fact that not all menstruating people are women.

Nguyen’s announcement came the same day as the hashtag #IfMenHadPeriods went viral on Twitter. The hashtag, initially an attempt to raise awareness of menstrual stigma and the high cost of health care products, accidentally sparked a conversation about transgender men and periods.

#IfMenHadPeriods Hi! I'm a queer, menstruating boy who's sick of your erasure of trans and nonbinary identities in this matter.

The discussion highlighted the experiences of transgender women along with the post-menopausal and women who have had hysterectomies and other medical procedures for health reasons.

In other school tampon news, public school students in New York City will also come back to school this fall to find bathrooms loaded with free menstrual products. The city passed a budget law that provides free tampons and pads in all public facilities this June, just weeks after the New York state legislature eliminated taxes on menstrual products.

However, it’s unclear whether New York schools will add tampons to the boy’s rooms—the state tax legislation refers to the necessities as “feminine hygiene” products.