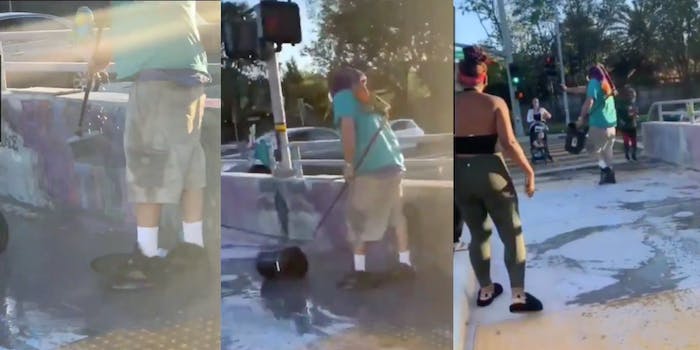 A video shows that a child in a stroller is included in the group he points the weapon at.

In an incident caught on video, a man attempted to wash away a Breonna Taylor chalk art mural and then brandished a weapon at bystanders who confronted him in San Francisco. Police are now searching for the man, according to CBS San Francisco.

CBS San Francisco reported the mural is a source of contention among locals: The mural has been washed away by people—and subsequently re-created by others—several times.

Officers reportedly responded to a report of a man brandishing a weapon at a crowd of people at the mural site on Thursday.

In a video of the incident, a small crowd surrounds the mural as a man attempts to wash it off. The recorder of the video asks him, “Bro, why you washing this off?” Others can also be heard asking him, “What are you doing?” and “Do you live here?”

Someone kicks over the bucket filled with water he is using, and the man pulls out a weapon, pointing it at the group of people—which includes a child in a stroller.

Police, according to the Marin Independent Journal, are unsure if the weapon was a handgun or a Taser but are “assuming it was a gun.” The Journal further reported the man was pretending to be a city worker. The city previously removed the mural one time because it did not go through a public approval process.

The man reportedly fled the scene before police arrived, and police are now seeking the public’s help in finding him.

Taylor was fatally shot by police in Louisville, Kentucky, in March. Protests were reignited across the country in September after a grand jury failed to indict the officers in her killing. Officials in San Francisco are now reportedly looking for a new place to house the mural that honors Taylor, citing an increase in concern for public safety.