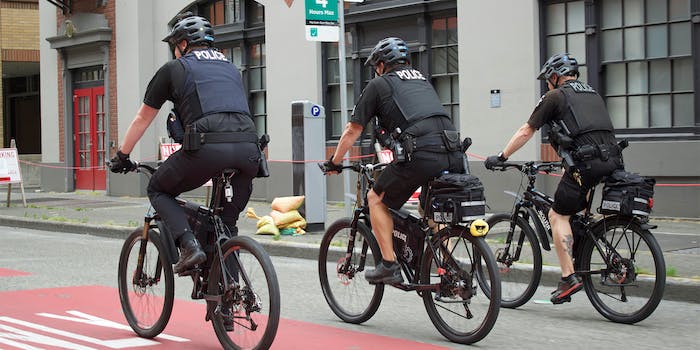 'He just ran over his head!'

A viral video shows a Seattle police officer rolling his bike over a person‘s head during protests for Breonna Taylor on Wednesday.

The video was taken by journalist CJ Halliburton on Facebook Live, according to BuzzFeed News.

A clip of the stream is being reposted on multiple platforms.

Another original video of the incident was posted to Twitter by Joey Wieser Thursday. His clip starts with a fleet of cops walking and riding their bikes through the street, while Wieser, who is recording from the sidelines, narrates: “They’re advancing on the line here.”

A person in white clothing is seen lying in the road as the officers advance toward the protesters. It is unclear why the person was on the road; some outlets are reporting he may have been injured or fell.

“This person is on the ground,” Wieser says.

While most officers cycle and walk their bikes past the man on the ground, one officer rolls both tires over the man’s head and neck.

“Oh my god, oh my god,” Wieser says. “I hope you all saw that. That officer ran over the man’s head with their bicycle wheel. Jesus Christ!”

A few officers are seen stopping, although, it’s not clear if they stopped because of the incident.

In a statement announcing it launched an investigation, the Office of Police Accountability said it “has received over 30 complaints concerning this incident.”