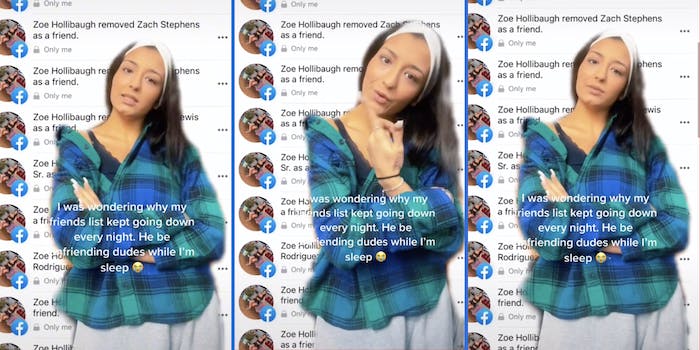 ‘Get rid of that man now!’: In viral TikTok, Woman says her boyfriend removed her male Facebook friends while she was asleep

'I was wondering why my friends list kept going down every night.'

In a viral TikTok video, a woman shares that her partner allegedly unfriended her male Facebook contacts while she was asleep.

“I was wondering why my friends list kept going down every night. He be unfriending dudes while I’m sleep,” Zoe Hollibaugh (user @zoeehollibaugh) wrote via text in the TikTok.

The TikToker includes a screenshot of at least 10 users being unfriended on Dec. 10, as she mouths the fitting lyrics of “Mr Mysterious” by D-Block Europe. “Are you serious? Went through my phone while I’m sleeping. I’m furious.”

The TikTok received more 300,000 views as of Friday, and many users in the comments shared similar experiences with their partners.

“My ex did this to me too !! He even deleted guys who were family members like what,” one user said.

“My ex wrote down every dudes name and I had to explain who they were,” said another.

“The night me and my ex exchanged [Instagram] password[s], I went to sleep with 4000 followers and woke up with 300,” said a third.

Others warned Hollibaugh of the intentions of her partner’s behavior.

“Same 🙄 I found out he was actually talking to other girls which is why he was so insecure of the guys on my fb lol,” one user said.

“Watch that shit they be jealous for a reason, usually they up to some[thing],” said another.

“Get rid of that man now!” a third user said.

However, some TikTok users admitted to removing friends from their partner’s social media accounts themselves.

“I caught my bf doing this, but I have been doing it to him too so I guess we were meant to be,” one user said.

“Wait this is so funny cause I used to do this to my boyfriends friend list #toxic,” said another.

The Daily Dot reached out to Hollibaugh via TikTok comments.

Partner surveillance is an ongoing point of concern on social media. Recently, a woman went viral on TikTok for contacting Verizon and trying to obtain her partner’s text history.