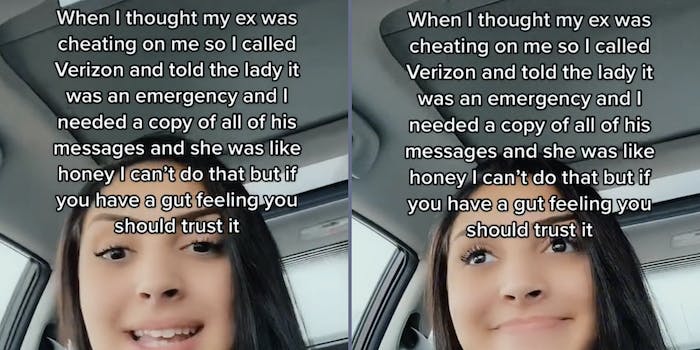 ‘Being like this isn’t healthy’: TikToker says she called Verizon to check ex’s messages, sparking debate over partner surveillance

'If you have a gut feeling you should trust it.'

TikTok users are sharing ways in which they surveil their romantic partners over concerns of infidelity, raising serious ethical questions about technology and dating in the modern era.

A video posted to the app earlier this month appears to show just how pervasive such surveillance has become, sparking widespread debate on a range of issues such as trust and boundaries.

The video, which has been viewed more than 740,000 times, details how TikTok user @thearmanim allegedly attempted to obtain an ex-boyfriend’s cell phone messages by contacting his service provider.

“When I thought my ex was cheating on me so I called Verizon and told the lady it was an emergency and I needed a copy of all his messages and she was like honey I can’t do that but if you have a gut feeling you should trust it,” a caption on the video reads.

The clip has since been inundated by similar stories in the comments, with many users admitting to contacting their significant others’ service providers for the same reason.

“Did we come across the same Verizon lady!?” another asked. “She told me she couldn’t give me info on the account but suggested if I knew his email to try a password.”

Given that service providers cannot give out another individual’s cellphone data without a warrant, such attempts are almost certainly destined to fail. But an alleged former Verizon employee stated that they often wished they could have alerted female customers to the data they came across.

“As someone who worked in a Verizon store for 6 years there were MANY moments we wished we could send things to girlfriends/wives,” the user said.

Others began sharing techniques that they claimed allowed them to keep tabs on their partners. One user said that they added their boyfriend to their account as a child, giving them the ability to monitor their location and activity.

Some TikTok users seemed to suggest that such actions weren’t needed and that users should instead rely on their instincts.

“I had a gut feeling when mine cheated on me & it was right,” another added. “Always trust it!”

But many argued that such surveillance was unhealthy and would doom a relationship to fail.

“Ok… if u r doing this than u need to work on urself… don’t ever lower urself over someone… just find a new partner… being like this isn’t healthy,” another remarked.

The comment section was also flooded with other suggestions such as hiring a private investigator or attaching a GPS tracker to a partner’s car. With the emergence of Apple Air Tags, physical tracking appears to be becoming even more common.

Stalkerware, apps that can be covertly installed on a partner’s phone to monitor their activities, is also booming. As noted by the Electronic Frontier Foundation (EFF), cybersecurity firms such as Norton report that “the number of devices reporting stalkerware samples on a daily basis increased markedly by 63% between September 2020 and May 2021.”

Not all surveillance, however, is done behind the scenes. Another viral TikTok video earlier this month showed a woman who forced her boyfriend to FaceTime her during his entire 12-hour shift at Amazon due to her concerns over his female co-workers.