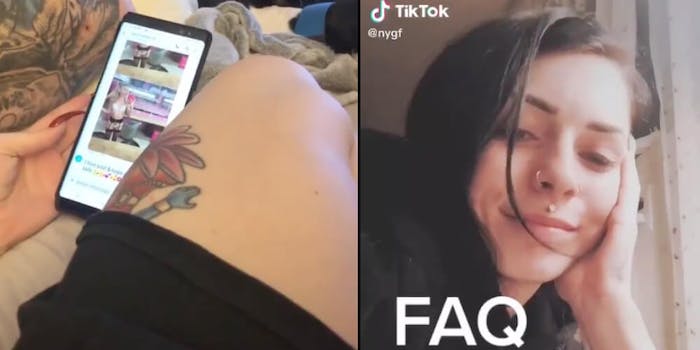 The video abruptly ends with the woman hitting her boyfriend with his phone.

A woman’s TikTok account is going viral after she exposed her boyfriend for cheating by filming his texts with the other woman.

The original TikTok, which has since been removed, shows the woman, Niah Robbins, unlocking her boyfriend’s phone and reading his texts with a person named “Jason Work 19.” Her boyfriend is snoring in the background, blissfully unaware of what’s about to go down. The messages are filled with the word “baby” and heart emoji. The video abruptly ends with Robbins hitting her boyfriend with his phone.

According to Robbins’ TikTok, the two were dating for a few months before he became “manipulative” and “sexually abusive.” Robbins said he forced her to stop working because he didn’t want to “share her,” and he, in turn, paid her bills.

Robbins said she tried to leave him multiple times during their relationship, but her boyfriend always managed to get her to stay.

Robbins said she noticed her boyfriend had changed his phone password but never thought much of it until one day. Robbins was filming herself reaching for her boyfriend’s phone and yanking her hand away while he slept as a joke, but then she decided to actually take a peek.

Robbins said her boyfriend’s messages with “Jason” were already open, and that prior to that, “Jason” had been calling all night.

In the last update Robbins gave, she revealed her ex was texting her and telling her he missed her, but it seems she’s moved on for good.

Robbins has been accused of doxing the woman because the woman’s address was in the text messages Robbins posted. But, Robbins made a TikTok in response to these allegations and said it wasn’t doxing because it was an old address that was shared.

You can watch all 18 drama-filled TikToks here.

This article has been corrected to state the TikTok user’s name is Niah Robbins.