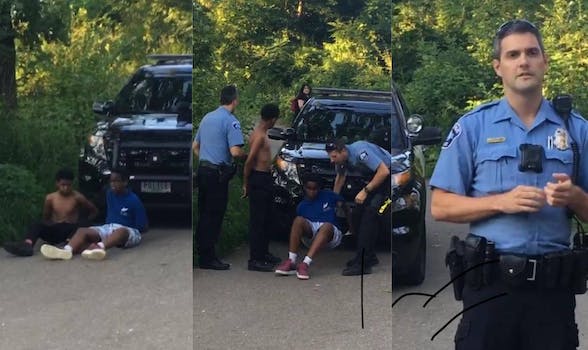 One officer pointed a gun at the teens.

The incident at Minnehaha Regional Park was captured in a now-viral video by a woman named Brianna Lindell, who posted the clip on Facebook. The video shows two of the teens handcuffed and sitting on the ground in front of a police car.

“One was begging for his shirt on the ground because he was being bitten by mosquitos. My partner tossed him his shirt and a cop jumped out of the squad car and started yelling at us that we were interfering with an arrest,” Lindell wrote in the Facebook post.

Lindell said she was told by two earlier witnesses that the officers “had jumped out their cars” and pointed their guns at the teens. A report by the Minneapolis Park Police confirms that one officer “did unholster his firearm and point it in the general direction” of the teenagers, who are aged 13, 13, 14, and 16.

The officers were dispatched to the scene after someone called 911 to report four males carrying knives and sticks and claimed that one of the teenagers had a gun in his backpack, BuzzFeed News reports. The caller also said the teens were “assaulting” her boyfriend.

Lindell said in her post that when she arrived at the park, she saw a young white male harassing the teenagers with a knife and a metal trash can lid while his female companion spoke on the phone.

After finding no weapons on the teens, police released three of them and took one to the Juvenile Supervision Center. Officers also investigated the 911 call but were unable to contact the caller or her boyfriend. In Minnesota, a false crime report is considered a misdemeanor-level criminal offense.

In an update, Lindell said she attended a parks and recreation board meeting Wednesday, where people expressed their concern and fear about the incident. “It’s clear that the community, especially the black and Somali community, have needs that aren’t being met and I hope the media attention to this will help with accountability there as well,” she wrote.

She also said that one of the teen’s coaches, who is a leader in the Somali community, told her that that teen’s mother was “very confused and frightened,” as the police dropped him off without any explanation. Lindell said that community has provided the teen’s mother with an interpreter and is working to provide trauma resources for the families involved.

The Minnesota chapter of the Council on American-Islamic Relations called for an investigation of the incident in a statement yesterday, as it believes the teenagers were targeted for being Somali.

The police report stated that the officers were wearing body cameras during the incident. Park Police Chief Jason Ohotto and Superintendent Mary Merrill have requested an independent investigation of the incident to ensure proper protocol was followed. They are also looking into the 911 call.