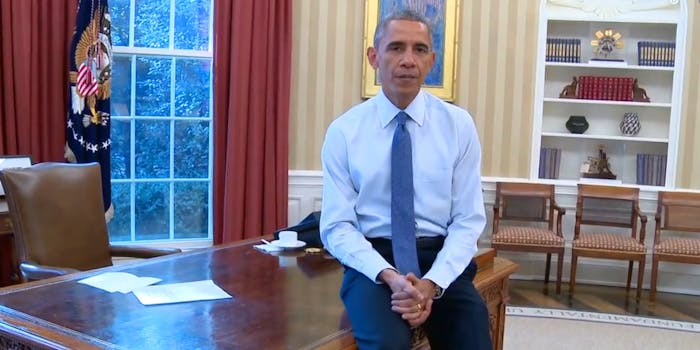 Facebook is where all the hot announcements get pre-announced.

President Barack Obama on Wednesday used the White House Facebook page to promise an announcement about his plan to unilaterally adjust the focus of America’s immigration law enforcement apparatus.

The president, sitting on the Resolute Desk in the Oval Office of the White House, said, “Washington has allowed the problem to fester for too long.” He promised to use his “lawful authority as president to make the system work better,” while also prodding Congress to pass a more comprehensive plan that he could sign.

The decision to use Facebook to announce the announcement is interesting, given that Facebook CEO Mark Zuckerberg has been a driving force behind comprehensive immigration reform through his and other tech executives’ Fwd.us initiative. It is unclear whether the president’s forthcoming action, which he plans to announce on Facebook on Thursday evening, is directly related to Fwd.us lobbying efforts.

President Obama’s plan will reportedly “refocus the activities” of federal immigration authorities, shielding undocumented immigrants whose children were born in the U.S. and prioritizing the deportations of violent criminals. A Migration Policy Institute report estimated that this central component of the multi-pronged execution action would cover up to 3.3 million undocumented immigrants.

President Obama’s decision to act alone on fixing the immigration system has drawn the ire of Republicans, who are newly emboldened by their sweeping victories in the midterm elections. Michael Steel, a spokesman for House Speaker John Boehner (R-Ohio), warned “‘Emperor’ Obama” not to exceed his authority on domestic immigration policy.

As the Associated Press has reported, Obama’s plan follows similar execution actions by Presidents George H.W. Bush and Ronald Reagan, neither of whom stoked conservative criticism for supposed “lawlessness.”

Screenshot via The White House (PD)