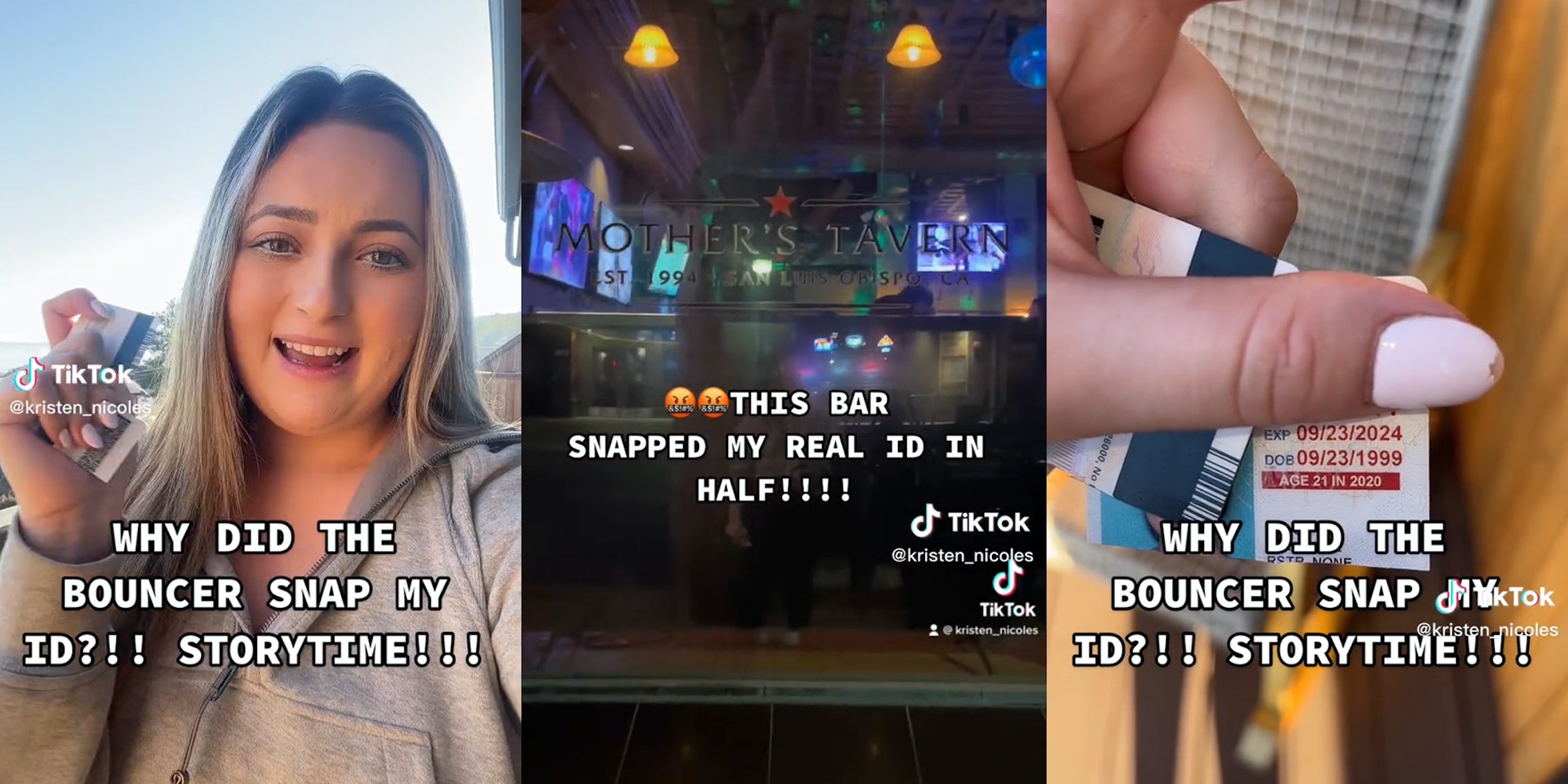 ‘My real ID, they just snapped in half’: 23-year-old says bar snapped her real ID in half

'Im 23 years old and i had another year till my license expires.'

A woman went viral on TikTok after claiming a bouncer snapped her ID in half without explanation.

TikTok user Kristen (@kristen_nicoles) uploaded a video about the incident on Jan. 23. As of Jan. 24, her video received 7.5 million views.

“I just came to this freaking bar and they snap my ID in half,” Kristen said. “My real ID, they just snapped in half.”

She held her hand up to the camera and showed that her ID was split in two. Then, Kristen filmed the bar while she continued to complain that the establishment cut a 23-year-old’s ID in half. According to the caption, the bar in question is Mother’s Tavern in San Luis Obispo, Calif.

@kristen_nicoles 🤬🤬So this place in downtown San Luis Obispo just snapped my ID in half !! I’m so upset! Im 23 years old and i had another year till my license expires. Called “Mothers Tavern” in downtown San Luis Obispo!!!!! DO NOT GO HERE THEY BREAK REAL ID’s UNTRAINED BOUNCERS !!!!!!! Lemme know if this has happened to you! #bars #sanluisobispo #GenshinImpact34 #fyp #snappedid #bouncer #clubs ♬ original sound – Kristen

In a follow-up video, Kristen detailed what happened the night of the incident. She said Mother’s Tavern was the first bar she and her friends went to. The bouncer stamped them on the wrist and admitted them without any problems.

After a few hours, Kristen and her friends decided to go to other bars. However, they later returned to Mother’s Tavern because Kristen wanted to use the bathroom there since it was cleaner than the one her friend used at another bar.

When Kristen got back to Mother’s Tavern, the bouncer who previously let her in was at the door. He asked to see the stamp on her wrist and gave Kristen a “funny” look after she showed it to him. The bouncer then asked to see her ID, which he also gave a “funny” look, before telling Kristen he needed to keep it while she used the restroom.

“I was really confused. I’ve never heard of a bouncer doing that,” Kristen said. “I had to pee really bad, so I said, ‘Okay, no problem, you can hold my ID.'”

Kristen said when she returned from the restroom, another bouncer was at the door while the bouncer who took her ID was “nowhere to be found.”

In a second follow-up video, Kristen continued the story. She said she found out from the new bouncer that the previous one was at “the other end of the bar.” As Kristen approached the original bouncer, he handed her the torn ID and claimed it was fake.

The TikToker noted to viewers that she hadn’t attempted to order drinks. She also said she was confused since the same bouncer let her in hours prior. The only explanation she could come up with for why the bouncer thought her ID was fake was that he may never have seen a vertical ID before.

Kristen left the bar after attempting to resolve the situation with a manager. She explained to viewers that she was upset because she was on vacation and her only form of identification had been destroyed. Luckily, she did not need to board a plane to go home. Unluckily, Kristen was the one who drove her friends to San Luis Obispo. She hopes she does not get pulled over on the way home.

Though the bartender told Kristen he would have to call the police on her, it seems he never did. Kristen considered calling the police over “destruction of property” but decided against it that night. However, the next day, she went to the police department to make a report against the bar.

Kristen concluded the video by saying she would continue the story in a third follow-up. As of the time of publication, the video has not been posted.

The Daily Dot reached out to Kristen and Mother’s Tavern via email.