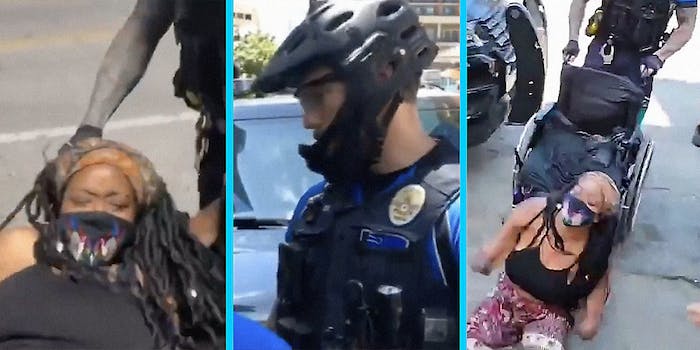 The woman, Whitney Mitchell, was attending a protest against police brutality.

A press conference held by families affected by police brutality in Austin, Texas, ended in more brutality, according to witnesses who say police dumped a quadriplegic woman out of her wheelchair.

Video taken on Monday shows police forcibly moving several people described as “peaceful protestors” while demanding they get out of the road and move to the sidewalk. One of the women struggled in her wheelchair as an officer moved her, appearing to angle her chair so that only the back wheels remained on the ground.

The officer and the woman briefly leave the camera frame, and someone shrieks. When the camera pans back, the woman is on the ground, and a bystander says she was just thrown from her chair.

“Getting her out of the road,” the officer says.

The woman in the wheelchair is Whitney Mitchell, the fiancée of Garrett Foster, who was killed during a Black Lives Matter protest last year by a counter-protester who allegedly made threatening comments toward protesters on social media.

The counter-protester, Daniel Perry, says he was acting in self-defense has not been charged in Foster’s death.

Prior to Monday’s altercation, Mitchell participated in a press conference to announce a united front with several other families seeking justice for slain loved ones, including police transparency surrounding their killings.

After the press conference, Mitchell and others marched towards Foster’s memorial to pay their respects.

One demonstrator who was present during the altercation with police says it started after an officer confiscated a banner that had briefly been left on the ground and refused to return it.

Mitchell and others reportedly followed the officer as he tucked it away in his squad car to demand it back, and officers insisted they get out of the road and forcibly moved them when they didn’t immediately comply.

On Twitter, commenters are outraged at the video, calling the situation just “another example that police do not protect and serve the people.”

The Austin Police Department did not immediately respond to the Daily Dot’s request for comment.