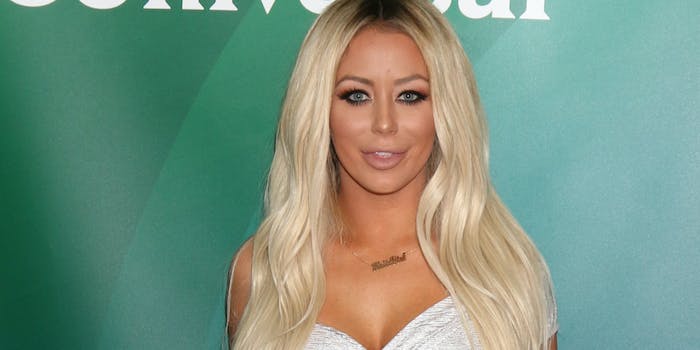 'When is this industry going to stop abusing women’s bodies?'

On Monday afternoon, the Daily Mail shared a series of photos allegedly showing former Danity Kane member Aubrey O’Day out for a walk with her dog.

The photo was presented like the juicy clickbait Daily Mail likely knew it would be. It presented 36-year-old O’Day as “unrecognizable” due to weight gain the photos supposedly show. Soon after the photos hit the web, O’Day was forced to respond. She posted a photo to Twitter, along with a frustrated caption. “It’s so sick what ppl will do for click bait,” she wrote. “And that my lawyer needed this photo to defend me against it.. when is this industry going to stop abusing women’s bodies!”

In the photos accompanying the tweet, O’Day can be seen in a black bathing suit with a piece of paper in her hand. The paper, apparently necessary to prove when the photo was taken, reads “it is Aug. 31, 2020 9 pm/ I’m Aubrey O’Day/this is degrading!”

O’Day is right. Being forced to prove your figure adheres to American society’s strict standards is thoroughly degrading, and should be entirely unnecessary. Unfortunately, the Daily Mail‘s article—and the many people who flocked to O’Day’s Instagram page to ridicule her—highlight the obsession we as a society have for not only slim bodies but also for shaming those we do not see as fitting the proper standard.

Obviously, O’Day’s appearance is none of our business. Who are we to dictate how she should look? Who are we to determine when O’Day is at her most attractive?

As noted by Jezebel, if the photos are, in fact, real, they shine a spotlight on a disturbing trend in the online sphere. That Daily Mail story seems deeply rooted in fatphobia. And as writer Justice Namaste noted, “it’s not just about her body potentially having changed, it’s about the fact that she could now potentially be fat, and therefore her body must be policed, shamed, and judged.”

Jezebel points to Adele’s recent headlines as evidence. The pop singer revealed dramatic weight loss in recent months, earning her praise from publications and people around the globe. The idea that Adele is worthy of praise hinges not only on her remaining slim but on her avoiding the perception of getting too thin.

We all know that celebrities, in particular, are held to ridiculously harsh standards. Jason Momoa easily falls into an unattainable standard in his typical roles. The well-muscled actor is often featured shirtless for this precise reason. Yet the moment he loses some of that muscle mass, he is shamed for having a “dad bod.”

Another, perhaps harsher example is Chadwick Boseman. The Black Panther star received consistent criticism from publications and fans over the last year, as photos detailed his dramatic weight loss. As in Adele’s case, the public generally assumed he was shedding pounds to fit an obsessively thin body standard.

All those critical comments stopped abruptly last week when Boseman’s family announced his death from colon cancer. Suddenly, those harsh comments about his weight loss were revealed to be in particularly poor taste, and many have since been deleted. The situation provides an excellent example of our need to be less afraid of bodies that don’t look one way.

O’Day’s need to “prove” her figure shows the complete lack of progress we’ve made. Even now, the comment section for her tweet is home to heaps of critical commentary. Accusations of photoshop run amok. These comments, and the hundreds of fresh comments on her Instagram page calling her horrible names and body-shaming her, completely ignore the fatphobic roots of their criticism. Weight gain is not a reason for dehumanizing criticism, particularly amid of a pandemic in which many of us have seen our bodies shift.