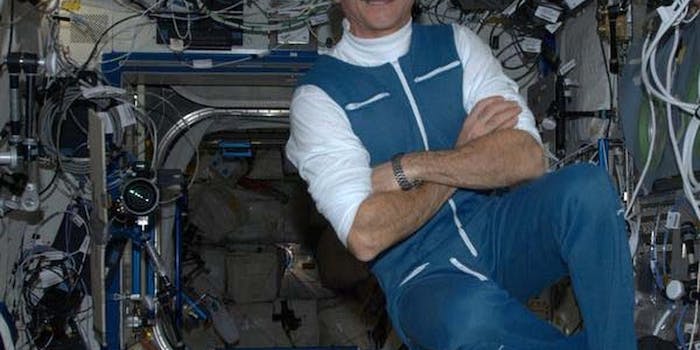 Chris Hadfield is currently providing a first-hand look at life aboard the International Space Station on Reddit.

One redditor has been upvoted all the way to the International Space Station (ISS).

Chris Hadfield, 53, was the first Canadian astronaut to walk in space and already had an active presence on Facebook and Twitter. Before traveling to the ISS on Dec. 19, however, he joined social news site Reddit.

Hadfield hosted a live-interview, known as an AMA, on the site about a week before he left and set up his own FAQ of standard interview questions in the comments to avoid repeats from other redditors. He proved no topic was off-limits as he covered everything from sex in space and pooping to his opinion on the food aboard the ship. He even debunked a popular myth.

“No astronaut has ever seen an alien, despite what popular media would like you to believe, though we are, of course actively looking; it’s one of the basic purposes of exploration,” Hadfield said regarding extraterrestrial life.

Hadfield, who decided to become an astronaut the day that Neil Armstrong and Buzz Aldrin walked on the moon, answered other questions from redditors for hours, providing insight on his education, his previous space experiences and hopes for the future of the space program.

“I sure hope we go to Mars in my lifetime,” he wrote. “We have satellites orbiting it, rovers driving around and sampling it, and are learning on the Space Station how to build spaceships that we could trust to go that far. One small step at a time, it’s amazing how far you can go.”

Hadfield isn’t the first educator or celebrity to stop by Reddit. But while some people may only use Reddit for promotional purposes or simply for the AMA, Hadfield has orbited far beyond that with contributions to r/space—a subreddit, or section, dedicated astronautical subject matter—prior to the launch and handed his account over to his son while he doesn’t have Internet access.

Since reaching the ISS, Hadfield has taken to social media to capture the experience of living on the space station.

An avid tweeter with over 34,000 followers, he often posts photos of the areas he passes, giving fans a rare look at how the earth looks from space. He also recorded ambient sound of the ISS after receiving requests from fellow redditors.

When he’s not working, Hadfield even showed a knack for songwriting, composing and performing “Jewel in the Night” aboard the ISS.

Hadfield won’t return to Earth for a few more months, but thanks to social media, people will be able to follow his journey every step of the way.