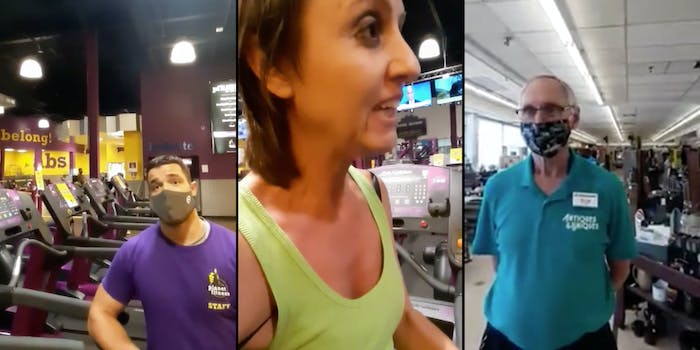 Coming as a surprise to absolutely no one, the “Karen” who went viral last week for refusing to wear a mask in a DMV while accompanying her boyfriend, has a history of harassing employees over mask mandates.

Anna Peric, or “DMV Karen” as the internet knows her, has uploaded at least four videos of herself arguing with employees over mask mandates to her Facebook page. Peric has recorded herself at the DMV and Planet Fitness, among other places, refusing to wear a mask.

Peric filmed two videos at Planet Fitness, one where she argued with an employee who told her she had to wear a mask and one with a security guard who tried to escort her out.

Peric told the Planet Fitness employee she did not have to wear a mask because she was exercising. Though the Ohio mask mandate requires citizens to wear masks at any “indoor location that is not a residence,” there is an exception for those who are “actively exercising,” according to Mike DeWine, the governor of the state Peric lives in, Ohio. This exception only applies if you are able to maintain a six-foot distance from others.

Though it was not Planet Fitness’ policy at the time, signs were posted around the gym asking patrons to wear a mask. Per Planet Fitness’ national COVID policy, which went into effect two days after Peric posted her video, all members are required to wear masks when working out.

Peric also said that the Planet Fitness was a public space. The employee and security guard speaking with her told her it is a private business, and they have their own mask policy.

Peric used the same argument at an antique shop. She told the owner he was required to “service every customer who comes in this public [space]” and threatened to report him.

“Go right ahead,” the owner politely told her.

When Peric’s other videos started circulating on social media, viewers immediately recognized her voice from her video at the DMV.

“That voice…it’s HER again for sure,” one Reddit user commented.

Her maskless crusade was not well-received by viewers.

“I’ve seen her in THREE videos wtf is this lady doing,” one Reddit user said. “These are nice people everywhere she is trying to antagonize. Mega POS.”

“I’m sure she is just thriving on all the negative attention as though she’s doing something patriotic,” another user commented.

“The way she talks, you can see how she’s trying to act all calm and keep her cool so she can play victim,” one Reddit user said. “This is the kind of person who tries to piss you off while acting so collected, and it gives them a huge rush to get a reaction out of others, just to then act a surprised at how the other person ‘is losing it.’ Fuck this type of Karen.”

As the U.S. surpassed 5 million COVID-19 cases this weekend, contention between those who refuse to wear masks and those who are in favor of mask mandates is growing.