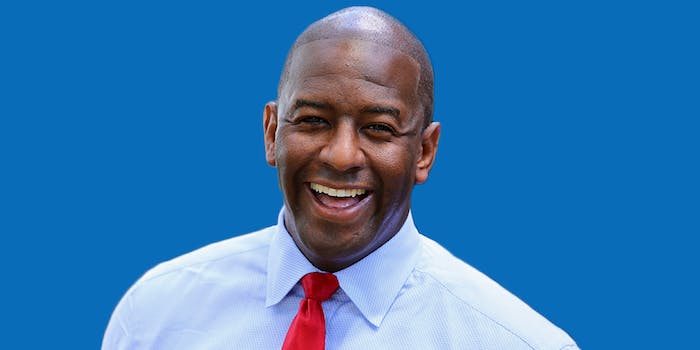 Gillum called out support DeSantis has received from Neo-Nazis and other racists.

When Florida gubernatorial candidate Andrew Gillum called out racist support around his opponent Ron DeSantis during their debate on Wednesday night, there were cheers not just in the room, but across the internet as well.

The race for the governor’s seat in Florida has been hotly contested and nasty. Multiple racist robocalls have been sent out campaigning against Gillum. The most recent, distributed by an Iowa-based white supremacist group called Road to Power, has someone mocking Gillum in a minstrel dialect, saying in part, “I is the Negro Andrew Gillum.” The ad has a monkey screeching in the background, making reference to a historical racist comparison of Black people to monkeys. The ad also made reference to Jews “putting Negroes in charge over white people, just like they done after the Civil War.”

The DeSantis campaign said they were not associated with the robocalls and condemned them. Still, many see racism in DeSantis’s campaign, and his supporters. Shortly after the primaries this year DeSantis told voters not to “monkey this up” by supporting Gillum, a statement some saw as a racist dog whistle.

During the debate between the two candidates on Wednesday night, Gillum brought these concerns about DeSantis into focus. “He’s got Neo-Nazis helping him out,” said Gillum. “He has spoken at racist conferences. He’s accepted a contribution, and would not return it, from someone who referred to the former president of the United States as a Muslim n*****.”

As my grandmother used to say — a hit dog will holler. pic.twitter.com/kC34Ldd0is

After presenting all of these facts Gillum simply concluded, “I’m not calling Mr. DeSantis a racist. I’m simply saying the racists believe he’s a racist.” DeSantis appeared visibly angered by the statement. The audience responded loudly, oohing, clapping, and laughing. Across the internet, people cheered.

The other quote folks are celebrating from the debate came while they were speaking on the same issue. When pressed on accepting a campaign donation from a person who called Obama the N-word, DeSantis retorted, “How the hell am I supposed to know every single statement somebody makes?” and said he would not, “bow down to the altar of political correctness.”

Gillum responded to DeSantis, saying, “My grandmother used to say a hit dog will holler, and it hollered through this room.”