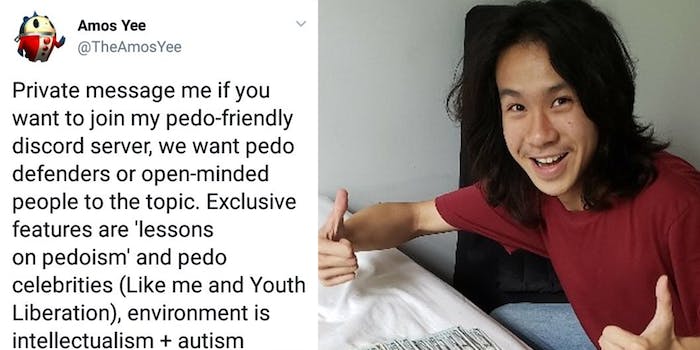 Amos Yee, the Singaporean vlogger who was granted asylum in the U.S. last year, has been suspended from Twitter for his pro-pedophilia views.

The 20-year-old’s YouTube channel was removed earlier this year after he used the platform to defend pedophilia, and it appears he transitioned over to Facebook and Twitter to continue promoting those views. More recent posts were circulated and reported last week in an effort to get Yee suspended. Yee posting an image of a young girl with the caption “How does one not become a pedophile?” might have been the deciding factor for Twitter finally banning him on Saturday. However, his Twitter bio had long declared, “I defend Pedophiles publicly on the Internet.”

He was also urging followers to join his “pedo-friendly” Discord server, though according to a Facebook post, that server was taken down, as were the accounts of people in that server.

This is Amos Yee a known pedophile and YouTuber. Twitter has been notified several times and nothing is being done, please share this and report him to proper authorities, this is not okay. pic.twitter.com/OognEoVJdD

On Tuesday, she released a statement writing, “Legitimizing pedophilia and organizing/promoting it generate negative externalities that involve the welfare of children, and they should not be given free reign. Being in America is a privilege and not a right. #AmosYee has abused that privilege. Deport him.”

Legitimizing pedophilia and organizing/promoting it generate negative externalities that involve the welfare of children, and they should not be given free reign.

Being in America is a privilege and not a right. #AmosYee has abused that privilege. Deport him.

A recent investigation by The Times found more than 100 instances on YouTube where pedophiles were grooming and manipulating children via live streams. Pedophiles have also reportedly tried to rebrand on Twitter, alleging they are “anti-contact” or “non-offending” in their behavior, which has led Twitter to be slower to suspend them.