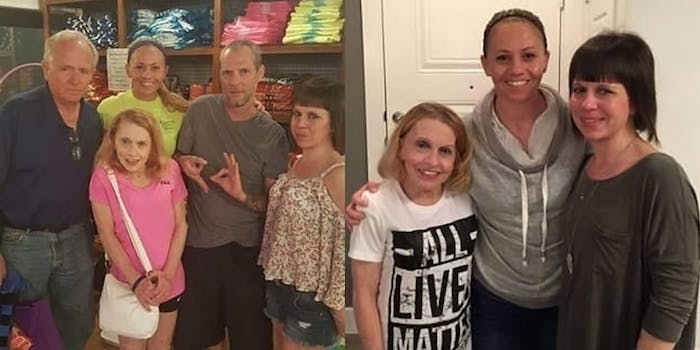 Internet detectives have found a photo of her mom wearing an 'All Lives Matter' shirt.

Since Dallas Officer Amber Guyger was arrested for killing her unarmed Black neighbor, Botham Jean, people have accused her family of being racist, which they vehemently deny.

While it is tragically common for police to kill unarmed Black people in America (and for those killings to go underreported), Guyger and Jean’s case has garnered great attention because Guyger entered Jean’s apartment and shot him, claiming that she believed it was her own apartment. Despite that she shot an unarmed man in his own home, Guyger was not arrested until three days later, after much public outcry and demands from the Jean family lawyer.

In the wake of Jean’s death, people are looking for answers. Some internet detectives have turned to Guyger’s family for an explanation of how this could have happened, and believe that the family may hold racist ideology.

The main evidence for this rumor are pictures of her brother-in-law, Noe Garza, making hand gestures that some say are representing white supremacy.

Wanda, have you seen this photo of Amber Guyger with her arm around man flashing white power hand signs? pic.twitter.com/8Sd6ZX3K5W

Speaking to the Dallas Morning News, Garza said that he is not a white supremacist, and the hand gestures in the most widely circulated picture are supposed to be a six and a nine for his father-in-law’s 69th birthday. “My last name is Garza. I’m a Mexican,” Garza said. “I don’t care about your nationality. I don’t care about the color of your skin. We all bleed red.”

The Anti-Defamation League examined the pictures for the Dallas Morning News, and determined that while Garza’s gestures bear a sort of resemblance to certain white supremacist hand signs, they “don’t think there is any white supremacist intention here.”

Here is the murderous Dallas police officer Amber Guyger. Notice her mom’s All lives matter T-shirt. Her brother also seems to be throwing some kind of gang signs. We demand real justice, cause this is not right. #AmberGuyger #BothemShemJean #BlackLivesMatter pic.twitter.com/g3B3ouEAI1

Another photo that has been heavily discussed is a picture of Guyger’s mother wearing an “All Lives Matter” shirt. Riffing on the Black Lives Matter movement, “All Lives Matter” is widely viewed as dismissive of police brutality and mostly used to attempt to silence people seeking racial justice. Some see Guyger’s mother wearing a shirt that dismisses a movement against police violence as foreshadowing for her daughter’s actions. Guyger’s sister, Alana, says her mother’s shirt was a gift to commemorate the five Dallas officers who were killed by a gunman in 2016.

Guyger was arrested and charged with manslaughter on Sunday, though prosecutors are reportedly considering more serious charges as more information comes out.