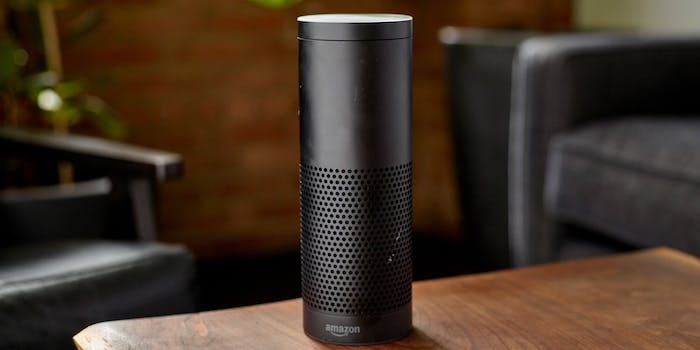 Alexa comes with a what?

There’s really no other way to put it: In an effort to illustrate the privacy issues surrounding Amazon’s many Alexa-enabled devices, Bloomberg Businessweek accidentally evoked a Fleshlight.

The Bloomberg illustration, which accompanies an article titled “Silicon Valley is Listening to Your Most Intimate Moments” in the magazine’s Dec. 16 issue, is meant to represent an ear inside of an Amazon Echo smart speaker. But when the cover story image was shared on Twitter, people immediately pointed out the close resemblance to a certain flesh-colored sex toy.

Someone did not think about this visual enough

It’s garnering serious attention from people who saw it as an ear—and those who saw something entirely different. For Twitter users in public or at work, it was cause to make sure no one was looking over their shoulder.

I did not think that was an ear and quickly looked behind me to see if anyone saw.

Mashable reached out to the makers of Fleshlight, who said they’re “into it.”

“We have seen the ad, we did immediately see the unintentional similarity, and even we think it’s a little eerie,” Fleshlight marketing manager Daniel Harvell told Mashable.

Even BarkBox, a dog toy subscription brand that inadvertently made pigs-in-a-blanket dog toy that looks like a sex toy, got in on the fun.

Really, when something like this happens, the jokes just write themselves. Most commenters riffed about the unexpected feature of Amazon Echo smart speakers and what it might mean for Alexa.

"Hey Alexa, how do you want me to f*ck you today?"

This is exactly why I don’t have an Alexa, Google home or sex with anyone

I can't believe Alexa doubles as a fleshlight. what will they think of next https://t.co/sIXm0fbEv1

Bloomberg responded to the Fleshlight comparisons by insisting that it’s just an ear.