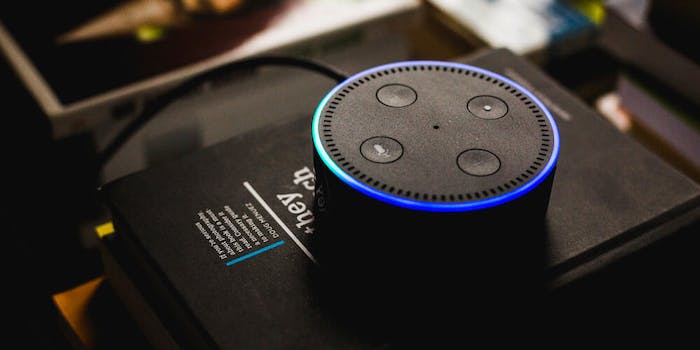 Officers say the device may have audio explaining how a woman was impaled with a spear.

Police in Florida have obtained voice recordings from two Amazon Echo Dot devices as part of an investigation into a suspected murder.

Investigators believe the recordings, which were turned over to the Hallandale Beach Police by Amazon, could reveal what happened in the moments before the death occurred.

The incident began in July when police were called to the condo of Adam Crespo after his wife, Silvia Galva Crespo, was impaled in the chest by a spear.

A police arrest report obtained by CBS 4 News indicates that the death came amid an argument between the couple. Crespo alleges that while attempting to pull his wife off their bed, Galva grabbed onto a spear in an attempt to stay on the bed and was pierced in the chest when the spear broke in half just as she fell.

Crespo then proceeded to pull the spear from his wife’s chest, hoping the wound “was not too bad.”

But police believe there could be more to the story and that the Amazon Echo devices in the home could have captured important evidence.

Although the virtual assistants are only supposed to record audio when summoned, devices have been known to misinterpret individuals and record audio inadvertently.

Despite no evidence indicating that any relevant audio was captured to begin with, Amazon gave police data from the couple’s account after being issued a warrant.

“It is believed that the evidence of crimes — audio recordings capturing the attack on victim Silvia Crespo… and any events that preceded or succeeded the attack — may be found on the server(s) maintained by or for Amazon.com for all recordings made by the aforementioned Echo smart speakers,” the warrant says.

Crespo’s attorney, Christopher O’Toole, believes that if any audio was indeed captured that it will clear his client of wrongdoing.

“I believe it’s an accident,” O’Toole said. “I believe either she broke the spear and it happened to be the perfect storm of her falling at the same time and or she grabbed the spear to try to reach out and hit him with it.”

Accident or not, police believe Crespo is responsible and have charged the suspect with second-degree murder.

Amazon also released a statement defending the release of the couple’s data, noting that it only does so when legally compelled.

“Amazon does not disclose customer information in response to government demands unless we’re required to do so to comply with a legally valid and binding order,” the company said. “Amazon objects to overbroad or otherwise inappropriate demands as a matter of course.”

This isn’t the first time police have sought Echo data. Police in Arkansas attempted to obtain audio recordings from an Echo device in 2016 as part of a murder investigation but were turned down by Amazon.