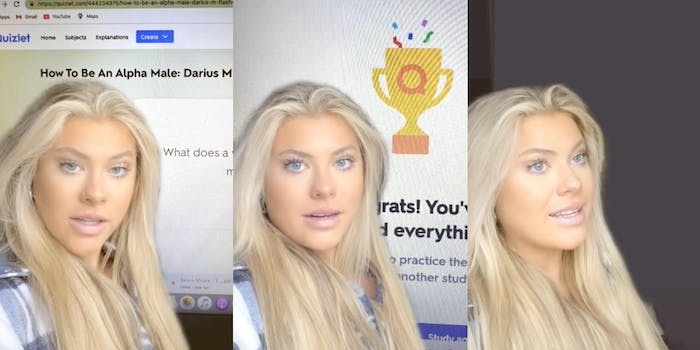 ‘You’re all betas’: Becca Moore aces YouTuber’s ‘How to Be an Alpha Male’ Quizlet in viral TikTok

The TikTok star with over 700,000 followers shared a Quizlet she took promising to make her one. The Quizlet was created by Darius M., a YouTuber with over 300,000 subscribers. The same guy who made a video about Moore being a gold digger.

With the sort of advice Darius M. offers on his manosphere YouTube channel, a “How to Become an Alpha Male” Quizlet is not so much a shock. Moore, with her signature dry humor, took this on.

“I found this and I was like No. 1: Clear my schedule. I need to learn. No. 2: This is probably going to be my personality for a really long time,” she says in the video that already has close to 1 million views.

Moore shares some of the questions that stuck out to her on the quiz, many of which she had to censor for TikTok. These included:

What’s the worst place you can take a woman on a date and why?

A restaurant. She eats for free, then leaves without [censored] happening.

Only _______ males take care of another man’s children

If a woman says she’s busy, what do you do?

Never let a woman withhold ____ from you.

Moore didn’t share the answer for that last one but added, “This one seems illegal like it could be used in court against him but, you know maybe there’s just some beta left in me.”

Viewers had a field day.

“Like this quiz is serious? This isn’t satire?” one commenter asked the creator.

“Nothing screams alpha male more than a Quizlet” another person adds in the comments on the video.

“What’s even more scary is he has 300k [YouTube] subscribers,” another person adds.

Just last week the Daily Dot caught up with Moore when she and Darius M. had their first interaction. He made a 10-minute-long video about her after she posted a conversation she had with a guy she met at the bar. When she ignored him he told her he had a jet, and she jokingly replied.

Most got the joke, not Darius M. In the YouTube video he talked about how Moore was just chasing money and praised the guy who “tricked” her.

“He just didn’t get the joke,” Moore told the Daily Dot.

Moore says she wouldn’t be shocked if he had a response video but in the meantime, she’ll continue to stand up for the girls. And maybe make fun of Darius M. while doing it.