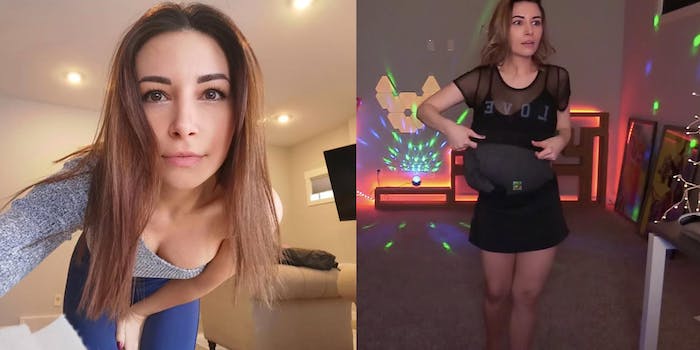 Alinity was attempting to shove a pillow under her clothes when she accidentally lifted her shirt up too high.

Controversial Twitch streamer Alinity Divine is once again the talk of the internet after flashing her viewers, leading to some calling for the suspension of her account.

Alinity was attempting to shove a pillow under her clothes on stream Friday when she accidentally lifted her shirt up too high, revealing her lack of bra to everyone watching. She seemed truly shocked by the incident, mouthing “Oh my god” as she pulled her shirt back down.

She reportedly removed the stream from her channel almost immediately, but the internet is forever, and clips of the nip slip were uploaded and shared widely.

As the footage circulated, people began calling for Alinity’s channel to be suspended or banned.

Alinity’s channel is still active at this point, though Twitch’s terms explicitly prohibit nudity as well as sexually suggestive content. However, it also claims to take the context of anything that violates its terms under consideration.

But other Twitch streamers have reportedly been suspended for less, leading many to express their frustration over the perceived hypocrisy and special treatment they have long felt Alinity gets from the platform.

It also isn’t the first time the popular streamer has been faced with calls for her account to be suspended.

In 2019, Alinity tossed her cat over her shoulder during a live stream, and a year earlier, she purposely allowed the same cat to lick vodka out of her mouth. The local SPCA investigated and cleared her of any wrongdoing, and her channel was not penalized.

There was also an incident in which some viewers thought used a racial slur, though Alinity claimed it was a misunderstanding based on how she pronounces words in English (which is not her first language).

While Alinity’s channel remains officially active as of Saturday morning, she announced on Twitter that she is going to self-ban for three days over the incident.