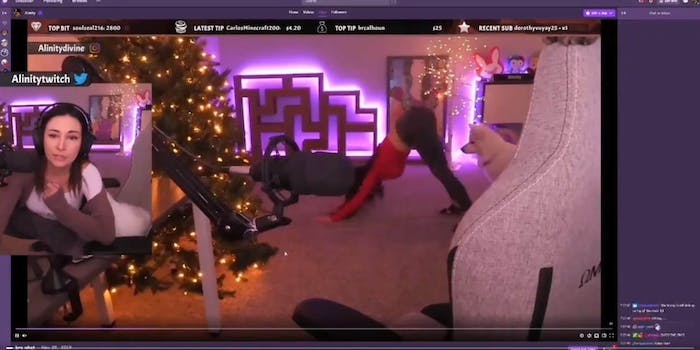 The video is cringe-worthy.

Twitch star Alinity Divine has once again raised online controversy with the way she’s interacted with her pets.

While attempting a headstand on her stream this past weekend, Alinity’s dog, Lola, walked up behind her and began sniffing her butt. It took Alinity a few seconds to realize what was happening, and when she did, she broke into hysterics because of the awkward scenario.

Plenty of others, though, didn’t find it funny.

Idk who I hate more

It's ok Alinity, I just checked @Twitch 's terms of service and there is no mention of beastiality…

You carry on girl…

On Sunday, Alinity clarified what happened with her dog, Luna. On Twitter, she wrote “We need to have a serious discussion right now”—she later tweeted that she was kidding about the “serious” part—and posted a video of her explanation.

We need to have a serious discussion right now pic.twitter.com/shBnwHzQbq

In the video, Alinity said Luna was trying to say hello while she was trying out a yoga pose. “I didn’t know she was there,” she said. “I didn’t really feel her. When I realized she was there, I was trying to push her with my leg. People are really mad about this. People think I should be banned for that. I think it’s so ridiculous. Y’all have gone way too far.”

In July, an annoyed Alinity streamed herself throwing her cat over her shoulder to the ground, and after Twitch declined to punish her, much of the streaming community was furious. An investigation by the Society for the Prevention of Cruelty to Animals found that her animals were healthy and safe in her care.

But that didn’t stop people from piling on her at the time. And now after her dog got a little too frisky this weekend, she’s again in the doghouse with many in the Twitch community.

“You all can report me or whatever for my doggie coming and sniffing my butt while I’m on my period,” Alinity said. “I didn’t even feel her, man. That pad was so big. It’s kind of ridiculous. I honestly can’t believe it. I didn’t think I could be surprised but I guess anything is possible with the internet and the things that will make people mad.”