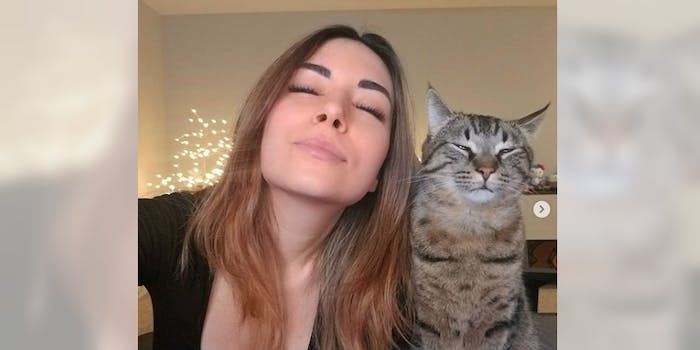 SPCA closes investigation into Alinity Divine for throwing her cat

A local SPCA went to Divine's home to complete a wellness check on all of her animals.

After Twitter users reported Twitch streamer Alinity Divine last week for throwing her cat during a broadcast, a local Society for the Prevention of Cruelty to Animals (SPCA) visited her house to complete a wellness check on all of her animals. The organization found that the animals are safe and in good health.

On Friday, the Saskatoon SPCA announced on its Facebook page that there was no “malicious intent” in any of the reported incidents. It added that Divine was cooperative and understood her responsibilities as a pet owner.

“During their investigation, Animal Protection Officers assessed each animal and determined that all appeared to be in good health and had friendly dispositions,” the organization wrote on Facebook. “The Saskatoon SPCA appreciates all of those who show concern and care for the well-being of animals everywhere and envisions a compassionate community where all animals are valued and respected.”

The announcement comes a week after many called on Twitch to ban Divine from the platform, where she has over 900,000 followers. About 32,000 people have even signed a Change.org petition, demanding for her removal.

The uproar began when a video surfaced of Divine throwing her cat over her shoulder as she was in the middle of an Apex Legends stream. Shortly after that, an older video popped up of Divine spitting vodka into her cat’s mouth as she kissed it.

After the videos circulated, Divine apologized for her actions on Twitter and invited the SPCA to visit her home. She said she understood people’s concerns about her animals.

“I also understand the desire to report me to pet authorities and encourage anyone to do so if they feel pets are being mistreated, by anyone, anywhere,” she tweeted at the time.

Called the @SaskatoonSPCA to come check these guys and the home out to clear up the complaints. They'll be here in a couple days. pic.twitter.com/aDnL12Gw4J