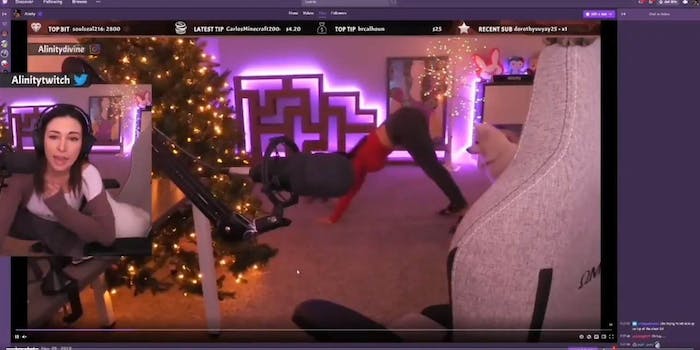 Twitch star Alinity Divine, who came under controversy last weekend when she streamed her dog sniffing her butt, has not been punished by the platform for any kind of inappropriate content. But an artist who depicted the incident has been banned for seven days for reimagining it in a drawing.

Jon Grim, who describes himself as a professional oil painter and who has about 15,000 Twitch followers, revealed that the platform had punished him for a week for his Alinity-inspired artwork.

“I got banned for drawing @AlinityTwitch the lover of dogs and thrower of cats a silly picture. I totally deserve the ban and I’m even glad twitch took action, just wish @Twitch held everyone to the same rules,” he wrote on Twitter.

hey guys I wont be streaming the next 7 days. I got banned for drawing @AlinityTwitch the lover of dogs and thrower of cats a silly picture. I totally deserve the ban and I'm even glad twitch took action, just wish @Twitch held everyone to the same rules. #stream pic.twitter.com/SnxllTxsba

He continued, “Apparently, I got nailed for bullying but ya know, calling a shitty person out on shitty behavior with a pretty goofy silly cartoon compared to the real thing is worth it if you ask me. if twitch won’t call them out then I guess we aren’t allowed to either.”

Many in the community are outraged that Twitch didn’t have anything to say about Alinity’s stream—to be fair, many in the community are always outraged when Alinity doesn’t face punishment for any controversial moment, minor or otherwise, on her channel. That included Alinity throwing her cat over her shoulder during a stream in July and once spitting vodka in her pet’s mouth.

Grim said he knew the risk he was taking when he envisioned the incident.

He wrote, “The drawing was fun either way.”

The controversy began last weekend when Alinity attempted to complete a headstand while streaming to her nearly 1 million followers. While basically in a downward dog yoga pose, her pet, Luna, approached her from behind and put her snout between Alinity’s legs. At one point, when Alinity realized what was happening, she tried to push Luna away before she gave up the headstand attempt and began laughing at the absurd scenario.

We need to have a serious discussion right now pic.twitter.com/shBnwHzQbq

“People are really mad about this,” Alinity said in the aftermath. “People think I should be banned for that. I think it’s so ridiculous. Y’all have gone way too far.”

She also said, “You all can report me or whatever for my doggie coming and sniffing my butt while I’m on my period. I didn’t even feel her, man. That pad was so big. It’s kind of ridiculous. I honestly can’t believe it. I didn’t think I could be surprised but I guess anything is possible with the internet and the things that will make people mad.”

Alinity, though, has continued to talk and joke about the incident in the days since.

She posted a HuffPost article from 2018 about why “Dogs Sniff Your Crotch When You’re On Your Period” and wrote, “I stream 6 days a week and get 12 periods a year. That’s at least 48 broadcasted period days! So there are literally people combing through thousands of hours of streams.”

She also posted an adorable photo of Luna and wrote, “IM LUNA AND IM HERE TO SNIFF.”

It remains unclear why exactly Grim, or any man on Twitch, is angry about the recent dog-sniffing incident.