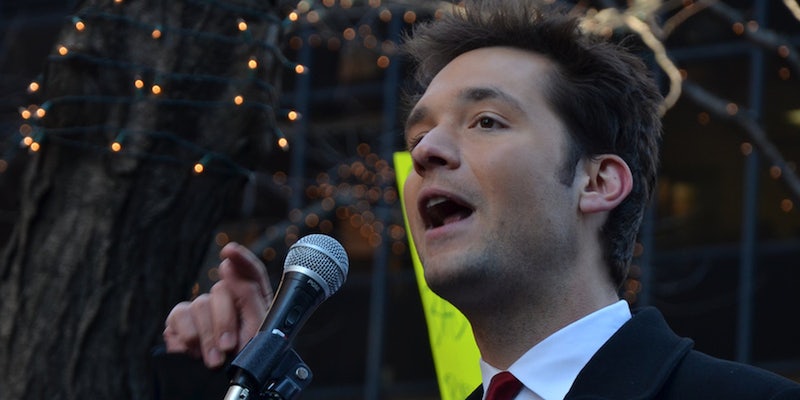 Reddit co-founder Alexis Ohanian denies allegations on that he worked for the intelligence contractor, Stratfor.

Controversy erupted today on Reddit after an email exchange between the company’s co-founder, Alexis Ohanian and the intelligence contractor Stratfor emerged on WikiLeaks.

A 2011 Anonymous hack of Stratfor, a contractor for the Department of Homeland Security and the Defense Intelligence Agency,  ended with millions of the company’s internal emails released by WikiLeaks as the “Global Intelligence Files.”

Redditors searching through that data dump discovered an email exchange between Ohanian and Stratfor employees, dating from January 2011. It was apparently initiated by Ohanian, who used the subject line: “reddit cofounder consulting for Stratfor to bring in the social media dollars.”

“I have never worked for Stratfor,” he told the Daily Dot, though the subject line of his email implies he did make an effort to do so.

In a 2011 email to Stratfor’s vice president of communications, he wrote, “It was so fortuitous to meet you and your husband!…I can let you know when I’ll be free to come by the office.”

Dozens of Reddit threads popped up Monday accusing Ohanian of being in bed with a company that’s extremely unpopular with Redditors. The rumors grew so loud that Ohanian eventually issued a public denial. He tweeted screenshots of messages he’d exchanged with Stratfor, including one revealing his proposal, a relatively benign-sounding offer to audit Stratfor’s social media presence for $25,000.

Ohanian also tweeted screen shots of his final exchange with the intelligence company. The vice president of communications thanked him for his proposal and told them they’d be in touch. There is no evidence of any further correspondence.

Apparently, the conversation began after Ohanian met the vice president at Stratfor’s Austin, Texas, office during South by Southwest. “I have never worked for Stratfor…they asked me for a quote to consult, so I gave it to them, but it went nowhere. We hadn’t talked since.” Ohanian told the Daily Dot.

According to Ohanian, the closest he has ever come to working for an intelligence contractor is being on a paid speaking panel in 2007.

The timing of the leak is unfortunate for Ohanian. The idea of collaborations between Internet companies and the U.S. government has been hotly debated since former U.S. National Security Agency contractor Edward Snowden disclosed the agency’s massive Internet surveillance operations this summer.

With one particular program, codenamed PRISM, the NSA obtains user information from Google, Facebook, Microsoft and other Silicon Valley tech companies. The program, along with others, collects users emails, messages, chats, photos and video.

In the days before PRISM was disclosed, it is doubtful that the world would have made much of a collaboration between a Reddit cofounder and an intelligence contractor. Indeed, Ohanian was likely unaware of any major link between these intelligence firms and large-scale government surveillance.

“I’d been a big fan because no one else reported on Caucasus as well and I was living in Armenia at the time,” Ohanian told the Daily Dot.

There is no indication Ohanian would have even considered a making his proposal in light of Snowden’s leaks, and Reddit’s General Manager, Erik Martin, has revealed that Reddit was never asked to participate in the PRISM program.

“When the WikiLeaks revelation happened years later, I did not renew my subscription [to Stratfor],” Ohanian added.