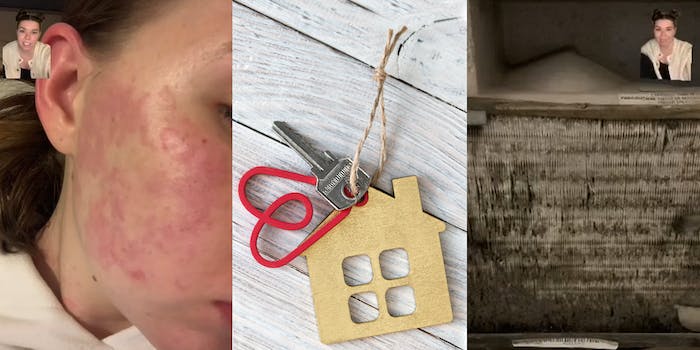 ‘It was an absolute sh*t show’: TikToker claims mold in her long-term Airbnb led her to break out in hives

'This repairman tried to convince me that that is just what ACs look like.'

While online complaints against Airbnb are nothing new, several creators have recently taken to TikTok and Twitter to share their experiences renting with the company.

One TikTok user, @brianneinlaw, chronicled her experience with her long-term Airbnb rental in New York City that turned out to be exposing her to mold. Her video received over 305,000 views.

The TikToker, who has over 12,700 followers on the platform, stitched a viral video from @trevaynebxtch, a self-described “Airbnb hater” who shared their own rental horror story.

@brianneinlaw #stitch with @trevaynebxtch #greenscreen ♬ As It Was – Harry Styles

In her video, user @brianneinlaw admits that when she arrived at the apartment, it wasn’t what she expected. She claims the building was listed as a former hotel that had been converted into studio apartments, but it was still a fully functioning hotel when she checked in. She also notes that the name of the building was different than what was listed on Airbnb, and the room she was given was not the same as the one she had booked.

“It was an absolute shit show,” she says in the video.

The TikToker claims she told the front desk that things weren’t what she expected but they said she would have to wait a few days before moving rooms.

“The next day I start breaking into hives,” she says. “I have hives all over my body.”

The creator then shares photos of her face and chest covered in red splotches. She initially thought it was due to the towels and sheets, but after purchasing new ones herself, her hives didn’t improve.

“Tuesday comes around, and it’s my first day at my summer associate position. And I am taking Benadryl every four hours on top of Advil to try to manage the hives,” she says.

A coworker suggested she check her air conditioning unit, and once she did, the TikToker found what was later confirmed to be mold. She says she contacted Airbnb and tried to contact the hotel manager to immediately replace the unit. Hours later, a maintenance worker came to fix it, but the TikToker says he claimed there wasn’t mold on the AC unit.

“This repairman tried to convince me that that is just what ACs look like,” she says. “But I was not letting him leave until I had a new AC unit.”

After much persistence with the repairman, the creator convinced him to replace the AC. As a result, she says she started feeling better that night. However, she notes she was still unable to move into the correct room and only received a $350 refund from Airbnb.

“On Wednesday, I go to get my room changed,” she adds. “They put me in the new room, and it is still the wrong room. It’s still too small, and it still doesn’t have the desk or the nightstand.”

Many viewers in the comments urged the creator to file a claim with her bank or pursue a lawsuit.

“Make a claim with your bank when you’re done even if airbnb is refusing a refund,” one person wrote.

“Lawsuit,” another said. “Forced into unclear conditions and breach of contract man. If you don’t follow through it will happen to the next person.”

Others shared their own experiences with Airbnb.

“I got a rash from sheets at an Airbnb in Colorado,” one user claimed.

“I am also using airbnb for my summer internship and it was a PAIN!” another added.

In an update video, the TikToker clarifies that she is allergic to mold, which caused her to get hives from the AC unit. She also notes that she doesn’t plan to pursue a lawsuit, as the attorney’s fees would cost her significantly more than the money she could receive in damages.

She also responded to commenters who questioned why she didn’t rent somewhere else when she realized there was an issue. The creator points out that housing is incredibly expensive and difficult to find in New York City, noting that she doesn’t have the funds to simply move to another apartment.

User @brianneinlaw declined our request for comment and requested her story not be covered. The Daily Dot also reached out to Airbnb via email.